From Andy Murray’s Wimbledon triumph to Justin Rose lifting the US Open, from a fond farewell to Sir Alex Ferguson to Jose Mourinho’s big welcome back, 2013 has been a pulsating year of sport, and ESPN has been there every step of the way. To celebrate another memorable year of sport, ESPN is offering UK fans a comprehensive sporting review of 2013, highlighting the stories, quotes and images that grabbed headlines and defined moments. Available online at www.espn.co.uk/review2013 and on mobile (via the ESPN UK app) it is presented in an innovative special section designed and built to showcase ESPN’s multimedia content and journalism. Experts from ESPN.co.uk, ESPN FC, ESPNcricinfo, ESPN Scrum, and ESPN F1 offer their predictions for the year ahead and readers can vote on whose predictions are most likely to come true in each sport.

In football, 2013 will be remembered as the year that Sir Alex Ferguson retired from football management after 26 years as the Manchester United boss. Liverpool and Arsenal seemed to be back to their best as England clinched qualification for next year’s World Cup in Brazil. ESPN FC TV’s team will share their predictions for the year ahead, in what promises to be a huge year in football with the World Cup in Brazil, new faces across Europe and new undercurrents at play in the Premier League table. 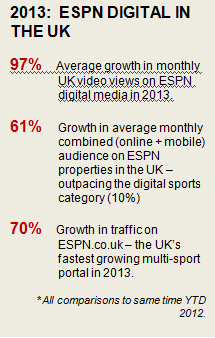 Cricket also waved goodbye to a legend this year. Sachin Tendulkar called time on an illustrious career which saw him become the face of a resurgent and proud India on and off the field. There were also two keenly fought Ashes series, with England currently trying to retain the urn down under while domestically, Durham claimed their third Championship title. ESPNcricinfo’s uniquely talented and passionate Andy Zaltzman will give his views on what to expect from 2014 too.

In boxing, Bernard Hopkins became the oldest IBF light-heavyweight champion at 48, Floyd Mayweather Jr vs. Canelo Alvarez broke the all-time live gate record and Derick Chisora grabbed headlines for all the wrong reasons. ESPN.co.uk’s boxing expert Steve Bunce, the face and voice of English boxing, is on hand discussing his predictions for the year ahead.

The ESPNscrum team have also been busy compiling and contextualising the highlights of 2013. Wales won their 26th Six Nations crown while Toulon earned their first European trophy, and New Zealand were impossible to beat – anywhere. Comedic trio Don’t DropThe Egg do the honours looking ahead to 2014 and what the rugby world should expect.

Jonathan Legard leads the F1 outlook, giving his predictions for next year. Will anyone be able to stop Sebastian Vettel’s relentless march into the history books? Or will Red Bull continue to dominate the sport as they did in 2013?

In keeping with ESPN’s commitment to technological leadership, the special ESPN.co.uk Year In Review section will be fully responsive across tablet, mobile and desktop devices – adapting to give the fan the best experience based on screen size, device, platform and orientation.

In the year ahead, ESPN will continue to focus on innovation in the way that fans experience and interact with sports content on digital devices anywhere, anytime.