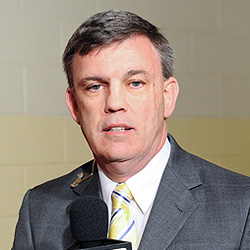 Teddy Atlas is a boxing commentator for ESPN.

Teddy Atlas joined ESPN in September 1998 to serve as ringside analyst for ESPN2 Friday Night Fights, the weekly series, which premiered October 3, 1998. He handles a similar role for ESPN Boxing Specials, and frequently contributes analysis to SportsCenter and ESPNEWS.

Atlas has been a well-respected boxing trainer since 1976, including six years at the legendary Catskill Boxing Club of Cus D’Amato. Atlas is perhaps best known for serving as Mike Tyson’s trainer the first four years of his career and preparing him for the eventual world heavyweight championship.

For his ringside commentary for ESPN in 2001, Atlas received the prestigious Sam Taub Award for Excellence in Broadcast Journalism from the Boxing Writers Association of America.

Prior to joining ESPN, Atlas served as ringside analyst for Showtime, ABC Wide World of Sports, and HBO radio broadcasts.