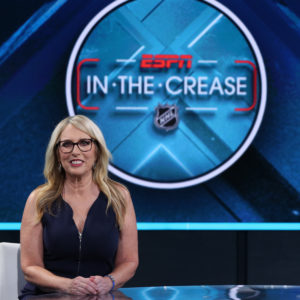 Hall of Fame sportscaster Linda Cohn has served as a SportsCenter anchor since joining ESPN in 1992. She is ESPN’s longest-tenured SportsCenter anchor and in early 2016 was recognized for anchoring her 5,000th SportsCenter, the most of any anchor in ESPN history. In 2017, she was inducted into the National Sports Media Association (NSMA) Hall of Fame.

A fixture in the hockey world, Cohn serves as the in-arena host and reporter for NHL game coverage, often reporting from between the benches. Cohn is also the primary host of In the Crease, a nightly hockey program on ESPN+, which began during the 2018 Stanley Cup Playoffs.

In 2021, Cohn and national hockey reporter Emily Kaplan launched In the Crease – The ESPN NHL podcast. The podcast brings fans insider perspectives, reporting, reactions and analysis to the latest breaking headlines and under the radar stories both on and off the ice. Cohn also currently appears as an analyst on SIRIUS XM’s NHL Network Radio every Monday during the NHL season and regularly fills in as a host on Mad dog Sports Radio.

One of the most well-rounded journalists in sports, Cohn has done everything – from breaking the hottest NHL story of the year in an exclusive sit-down with Evander Kane in 2021 to live broadcasting her tryout as an emergency backup goalie for the Florida Panthers in 2016 on SportsCenter. The versatile Cohn has also hosted ESPN’s Baseball Tonight and National Hockey Night, ESPN2’s NHL 2Night and RPM 2Night, and SportsCenter’s NBA All-Star Game coverage. She also provided play-by-play of ESPN and ESPN2’s coverage of the LPGA (1998-99), ESPN2 and ABC’s WNBA regular season, All-Star game, Finals and Draft. Cohn contributed to ESPN’s NFL Draft coverage, Major League Baseball playoff coverage, the ESPYs and Sunday NFL Countdown. She has also provided on-site SportsCenter reports from the Men’s Final Four and X Games events. From 1999 to 2002, Cohn’s column “Linda Cohn’s Hotline” was regularly featured in ESPN The Magazine’s Life Section.

In 2008, Cohn authored her autobiography – Cohn-Head: A No-Holds-Barred Account of Breaking into the Boys’ Club. The book details her hard-fought rise to the top of the sportscasting world and her life inside the ESPN empire.

Cohn began her career in sportscasting in Patchogue, N.Y., as a news anchor, writer and sports reporter for WALK-AM/FM in 1981. She continued her work with three other New York radio stations until 1987: WCBS NewsRadio 88 (1984-87); WCBS-FM (1984-87); WGBB-AM (1984-85). Cohn’s radio experience is highlighted by her becoming the first full-time female sports anchor on a national radio network (ABC) in 1987 where she worked 87-89. In 1985 she began working for WLIG-TV on Long Island as a part-time anchor and reporter. She also worked as anchor, news director and chief correspondent for Long Island News Tonight, a daily television news program (1985-86). Beginning October 1989, Cohn worked at KIRO-TV in Seattle where she was a weekend sports anchor and full-time reporter.

Cohn received a bachelor of arts degree in communications from SUNY at Oswego in 1981.  As a senior at Newfield (N.Y.) High School, she served as the goalie on the boy’s ice hockey team and in college on the Oswego women’s ice hockey team. NHL on ESPN+ in January: Multiple Appearances by Every Division-Leading Team