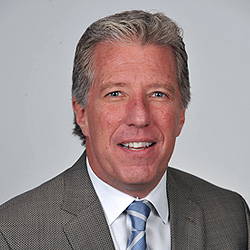 Jamie Reynolds – whose first stint at ESPN started in 1984, later returning in 1996 – serves as a vice president, production with a primary responsibility overseeing the company’s extensive tennis portfolio. The year-long schedule is highlighted by start-to-finish coverage of three of the sport’s four Majors – the Australian Open, Wimbledon and the US Open – including U.S. exclusivity for the latter two.

Over the years, Reynolds has also overseen production for the NBA; the X Games; golf, including the Masters; plus horse racing, including the Belmont Stakes and Breeders’ Cup.

Reynolds was promoted to vice president in 2006, having served since 2000 as senior coordinating producer, responsible for X Games and action sports programming. In 2001, Reynolds also took on the added role of managing remote production for the NBA, upon its return to ESPN and ABC Sports.

Reynolds first joined ESPN as an associate producer in 1984; his assignments included tennis’ French Open, golf’s British Open, college football, World Cup Skiing and the U.S. Olympic Festivals. He spent one year in Australia for the network’s coverage of the 1987 America’s Cup.

From 1988 to 1996, he operated as an independent producer/director, working on a variety of productions for ESPN, ABC and NBC, in addition to producing commercial work for other clients. His directing credits include the 1995 America’s Cup (Host Broadcast), 1996 Olympic Games (Yachting) and two expeditions to the Southern Ocean, including a five-week journey to Antarctica.

In 1996, Reynolds rejoined ESPN as a coordinating producer when the network launched the X Games, then called the Extreme Games.

While a student at Bucknell University, Reynolds taught sailing and raced competitively. He graduated with degrees in biology and English.