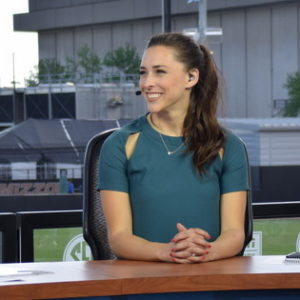 Kayla Braud was hired as a college softball analyst in the spring of 2014, contributing to ESPN’s coverage of regular and postseason softball as a color commentator and studio analyst.

Braud was named to the original cast of Rally Cap on SEC Network, joining host Dari Nowkhah and analyst David Dellucci in the clubhouse to break down each week of the SEC softball and baseball season. She moved over from the studio to the booth for the 2019-20 season, adding in-game analysis for SEC regular and postseason action on SEC Network.

Braud is no stranger to the softball diamond, having captured the 2012 Women’s College World Series crown with the University of Alabama, and being honored as a three-time All-American (2011-2013) during her time with the Tide. She was the 2013 Senior CLASS Award winner, which honors the attributes of NCAA Division I senior student-athletes in four areas: community, classroom, character and competition.