Suzy Kolber originally joined ESPN in 1993 and is a mainstay of the company’s NFL coverage. She hosts Monday Night Countdown, ESPN’s Monday Night Football pregame show, as well as MNF halftime and postgame segments from the site of each week’s prime-time game. Kolber is also a key contributor to the company’s Super Bowl week and NFL Draft coverage.

In 2017, Kolber was promoted to her current role as solo host of Monday Night Countdown and the MNF halftime and postgame. She originally joined Countdown in 2015, following her close friend and colleague Stuart Scott, and she co-hosted the show with broadcasting legend Chris Berman from 2015-16.

Widely praised for elevating the NFL sideline role, Kolber covered ESPN’s NFL prime-time games on Sunday Night Football (2001-05) and Monday Night Football during the series’ first six seasons on ESPN (2006-11). In 2006, Kolber experienced one of her career highlights, working the sidelines for ABC Sports’ broadcast of Super Bowl XL in Detroit and contributing to the network’s pre-game show.

The first female recipient of the Maxwell Football Club’s Sports Broadcaster of the Year Award in 2006, Kolber was also named to Sports Business Daily’s 2004 list of the 10 favorite sports TV personalities of the past 10 years. In 2018, she was honored by The Pennsylvania Association of Broadcasters as a Gold Medal Honoree, and in 2019, she was inducted into Philadelphia Sports Hall of Fame.

When ESPN2 launched in 1993, Kolber joined the company as co-host of SportsNight, which debuted October 1. She later served as an anchor on SportsCenter, a reporter on College GameDay and co-host of the X Games in 1995 and ’96. Kolber also hosted ESPN2′s SportsFigures, which used sports celebrities and analogies to teach math and physics.

Kolber left ESPN for Fox Sports in November 1996, and there she anchored a nightly sports news program and reported from NFL games in addition to hosting figure skating and weekend NHL coverage. Upon her return to ESPN in 1999, Kolber served as host of NFL Matchup (1999-2003) and contributed “Backstage” segments to Monday Night Countdown.

Her credits also include hosting Triple Crown horse racing events for ESPN as well as ESPN pre-race NASCAR Countdown shows on ABC in 2007, often during the same weekends as MNF games in the fall.

Kolber came to ESPN from WPEC-TV in West Palm Beach, Fla., where she was a weekend sports anchor and weekday feature reporter since December 1991. In 1991, Kolber’s freelance assignments included work as a reporter/producer for Breeders’ Cup Newsfeed in Greenwich, Conn.; a field producer for Inside Edition in New York; a sports specials producer for WCIX-TV in Miami, and a producer/director for NFL Films.

Kolber graduated from the University of Miami in 1986 with a bachelor of arts degree in telecommunications. While an undergraduate, she worked at Dynamic Cable in Coral Gables, Fla., as a sports director (1984-86). After graduation, she worked at CBS Sports in New York as a videotape coordinator (1986). 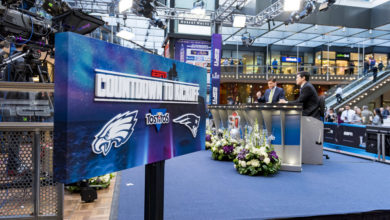