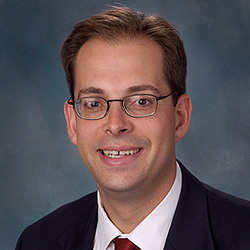 Josh Krulewitz serves as a vice president, communications, in ESPN’s  communications department.  Promoted to this position in 2006, he oversees publicity efforts for the hundreds of college sports events annually on the ESPN networks and ABC, including college sports network ESPNU, and sports news programs, including SportsCenter and the all-sports news ESPNEWS network.  For three years, he also oversaw the network information area of the department, comprised of listings, the media web site, photography and viewer response.  He had held the position of senior director, communications, since 2005.

Krulewitz has been with ESPN’s communications department since before he was graduated from the University of Connecticut in 1992 with a bachelor of science degree in business management.  He was an intern as an undergraduate in 1990 and 1991 and joined the company fulltime as a publicist in 1992.  He was promoted to senior publicist in 1995 and to coordinator in 1996.  He was promoted to manager in 1999 and to director in 2001.  Among the major successful publicity campaigns he has handled are the launch of ESPN2 in 1993; numerous editions of the X Games and Winter X Games; 1999’s SportsCentury project, the Emmy- and Peabody-Award winning review of the 20th Century in sports; and ESPN’s unprecedented coverage of the entire NCAA Women’s Basketball Tournament.  He also has been the department’s point person in issue management, in particular with regards to studio programming and personnel.

In 2008, he was named a recipient of the Katha Quinn Award, given by the U.S. Basketball Writers Association.  It is presented annually to individuals who service members of basketball media, in honor of the former St. John’s Univ. sports information director who died in ’88.  He also is a key member of the company’s V Foundation Committee, which supports the efforts of The V Foundation for Cancer Research, and is director of ESPN’s annual employee golf tournament.