Outside the Lines and E:60 Host

Bob Ley is ESPN’s longest-serving commentator, joining the network as a SportsCenter anchor on its third day of operation (September 9, 1979).

Ley spearheads ESPN’s aggressive coverage of breaking news and issues, primarily as host of Outside the Lines since its inception in May 1990 and also as a host of the weekly E:60 on Sunday mornings. The award-winning OTL, which focuses on issues beyond the playing field, has evolved from periodic specials to a five-day-a-week series (Monday-Friday) which has captured 11 Sports Emmy Awards and three CableACE Awards as cable’s top Sports Information Series. Ley and Outside the Lines have received the most coveted prizes in TV journalism; including a duPont Award, two Peabody Awards, as well as multiple Edward R. Murrow Awards while also recognized with Northeastern’s 1995 Excellence in Sports Journalism Award and Lifetime Achievement honor in 2009 from the University’s Center for the Study of Sport in Society, together with the University’s School of Journalism. In May 2018, Ley received the Sports Emmy for outstanding studio host and in 2019 he was inducted into the National Sports Media Association Hall of Fame.

Throughout his ESPN career, Ley has been equally comfortable leaving the studio to cover a variety of events on site as a host or handling play-by-play. A passionate life long soccer fan, Ley has hosted the 2014 FIFA World Cup from Brazil and the 2011 Women’s World Cup from Germany, and served as lead commentator for World Cup ’98 and host of ESPN’s on-site studio coverage of the 2010 FIFA World Cup from South Africa. He received the Honorary All-America Award by the National Soccer Coaches Association of America for his contributions to the sport in January 1999.

In May 2015, Ley was lauded for his hosting of ESPN’s coverage following the indictments of several senior FIFA officials, and the subsequent presidential election for soccer’s global governing body.

Throughout his tenure, Ley has become identified with ESPN’s coverage of major stories, breaking news and cases where sports-related events land on the front page, from Magic Johnson’s AIDS announcement to Pete Rose’s suspension by Bart Giamatti. Viewers have benefited from Ley’s smooth, steady delivery and keen ability to find the right phrase to put issues into perspective, whether from San Francisco where he provided the first live national reports during the 1989 World Series earthquake (ESPN’s production facilities were not dependent on local electrical power), or in the studio where he anchored ESPN’s first post-attack programming on 9/11 (after simulcasting ABC News’ coverage throughout the day). He has also lent his expertise in providing ESPN interviews with four U.S. Presidents (Ford, Clinton, G.H.W.Bush aboard Air Force One and G.W.Bush).

A 1976 magna cum laude graduate with a bachelor of arts degree in communications from Seton Hall University where he served on the Board of Regents, Ley began his career in television as an undergraduate. He was a production manager at WOR-AM in New York (1975-77) and also served as public address announcer for the Cosmos of the North American Soccer League, and as a sportswriter for the Passaic (N.J.) Herald-News.  In 1976, Ley joined Suburban Cablevision (East Orange, N.J.) as director of sports/public affairs.  During his three years there, Suburban Cablevision won four local CableACE Awards for both sports and overall programming.

A New Jersey native, Ley, born March 16, 1955, was valedictorian at Bloomfield (N.J.) High School, class of 1972. The married father of two daughters, he was inducted into the Bloomfield Athletic Hall of Fame for his contributions to sports journalism in May 1987. He was the recipient of an honorary Doctor of Humane Letters at both Seton Hall which he received while giving the commencement address in 2019 and the University of Hartford’s 51st annual Commencement ceremony in 2008 when he presented the main commencement address. 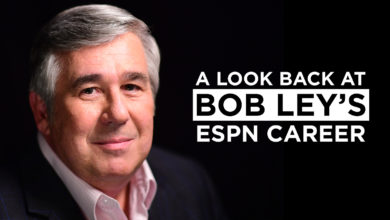 A Look Back at Bob Ley’s ESPN Career 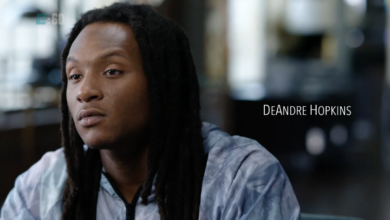