Maria Taylor joined ESPN as a college analyst & reporter in 2014. One of the network’s most versatile commentators, Taylor was named a reporter for College GameDay Built by Home Depot and ABC Saturday Night Football in 2017. She added NBA Countdown hosting duties to her roster in 2019. She had previously served as the host of SEC Network’s traveling pregame show SEC Nation, alongside analysts Tim Tebow, Marcus Spears and Paul Finebaum. Taylor’s versatility is showcased on a variety of ESPN’s shows and platforms, as she hosts College Football Live, Big Monday and NCAA Women’s Final Four studio coverage, serves as a regular co-host on Get Up, and works as a sideline reporter on Saturday Primetime and marquee men’s basketball games throughout the season. In addition, Taylor is an analyst on other SEC and ESPN telecasts, including volleyball and women’s basketball. She is also a part of ESPN’s NBA Draft coverage.

Prior to 2012, Taylor was reporter and host for IMG College at the University of Georgia for three years. She also appeared on various studio shows including Dawg Report, SEC Men’s Basketball Tonight, and SportsNite.

Taylor attended the University of Georgia where she played volleyball and basketball for the Bulldogs. She was named to the All-SEC volleyball team three times and was also a member of the USA A2 National Volleyball team. She graduated from Georgia in 2009 with a degree in broadcast news. She returned to the University to pursue her Master of Business Administration which she completed in May of 2013. She is a native of Alpharetta, Georgia. 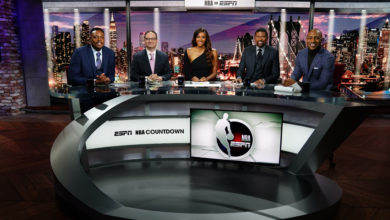