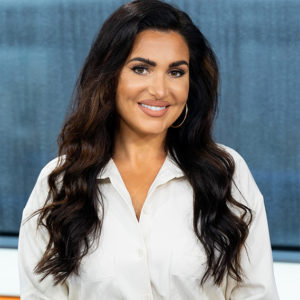 Molly Qerim is the familiar female face and voice who commands the desk on ESPN’s hit morning show, First Take. The Emmy Award-winning Qerim is at the helm, working alongside Stephen A. Smith and a rotating team of guests to moderate very strong personalities with both warmth and authority. In this role, she regularly showcases her ability to connect with a wide variety of guests through interview segments.

Qerim thrives in front of a live audience when First Take travels to marquee sporting events as an on-site presence for ESPN.

Early in her career, Qerim spent four years at ESPN beginning in 2006 contributing to digital and mobile platforms, earning an Emmy in 2008 for her work on Fantasy Football Now.

Qerim returned to ESPN in 2015 and was immediately tapped to host First Take, the position she currently holds. In addition to covering all the championship events, Qerim has a breadth of experience with celebrity red carpets, A-list musical and TV/film guest interviews, UFC/MMA coverage, tennis, boxing and more.

Off camera, Qerim is a philanthropist and ambassador for Boys and Girls Club of America, the Innocence Project and is an advocate for endometriosis awareness.

A native of Connecticut, Qerim graduated from the University of Connecticut with a bachelor’s degree in communications and a minor in business administration. She received a master’s degree in broadcast journalism from Quinnipiac University and was inducted into their inaugural Hall of Fame class in 2020.