Sam Ponder is the host of Sunday NFL Countdown. When she assumed the role in March 2017, she was just the third person to occupy this position in the 32-year history of ESPN’s Sunday morning NFL pregame show. In addition to hosting, Ponder also contributes NFL interviews and features.

A former contributor to College Football Live and the 12-time Sports Emmy Award-winning College GameDay Built by The Home Depot (2012-16), Ponder also served as a reporter for the ABC Saturday Night Football telecast with Chris Fowler and Kirk Herbstreit in 2016.

Ponder, who started at ESPN in 2011, also worked as a reporter for college football (Thursdays), as well as Longhorn Network events, studio shows and feature stories out of the LHN studios in Austin, Texas. Additionally, she served as a reporter for ESPN’s Tuesday and Saturday primetime college basketball games.

Prior to ESPN, Ponder was a host and reporter for Fox Sports where she contributed to both Fox Sports Net and Fox College’s coverage of college basketball and football in the Pac 10 and Big 12 conferences. As a host, she led the pregame, halftime and postgame studio shows for various events, including the Pac 10 Basketball Tournament and “Paradise Jam,” a preseason tournament in the U.S. Virgin Islands featuring teams from the ACC, Big East, and other various conferences.

Ponder also joined radio shows around the country during the college football and basketball seasons to discuss the latest news in college sports, and she was a former weekly columnist for FoxSports.com.

Prior to joining Fox College Sports, Ponder interned with ABC Sports Radio and assisted with research on ABC Television’s College Football Studio show in New York. She also served as the sideline reporter and host for all football and men’s and women’s basketball games while in college at Liberty University in Lynchburg, Va.

Ponder is a native of Phoenix, Ariz. 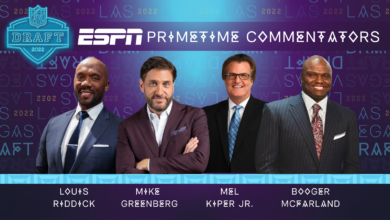