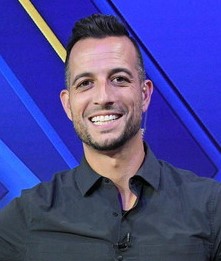 Tony Reali is host of ESPN’s Around the Horn, the enduring daily sports debate show and one of the network’s most popular programs. The face of ATH since 2004, Reali has hosted over 3,500 episodes of the game show themed debate armed with mute buttons and a scoring joystick. Combined with his on-air presence on ESPN’s Pardon the Interruption from 2001-2014, Tony is a cornerstone of ESPN’s on-air line-up and one of its most beloved faces for an entire generation of sports fans.

Around the Horn airs weekdays at 5 p.m. on ESPN – 230 shows a year – as part of the network’s critically acclaimed and well-received “happy hour” alongside the Emmy award-winning PTI. Around the Horn averages a combined 2.5 million views on a weekly basis in the U.S. Adding re-airs on multiple ESPN networks, DVR views, podcast listens, and affiliates in all continents, ATH’s reach is far greater.

Reali is one of ESPN’s most popular on-air personalities and his influential online presence includes more than 800,000 followers on Twitter. Admired for his authenticity, energy and positivity – both in and out of sports, Reali is an advocate for mental health awareness, equality, diversity and spiritual enlightenment. He has written for publications ranging from The Washington Post to the Anxiety and Depression Association of America on these matters.

Reali has notably worked with the Special Olympics, hosting athletic events and championing inclusion in Unified Schools. In 2019, he was the featured guest of Generation Unified, the annual conference held by the youth ambassadors of the Special Olympics.  Reali’s advocacy for mental health was most on display in June 2018 when he openly shared on Around the Horn how he and his family dealt with grief upon losing a child in childbirth.

Reali joined ESPN in July 2000, writing and researching trivia questions for the quiz show Two Minute Drill.  In October 2001, he was hired as researcher on Pardon The Interruption.  When PTI debuted, he assumed the on-air role of “Stat Boy” to Tony Kornheiser and Michael Wilbon. Concurrently, he served as the fill-in host and a guest panelist on Around the Horn.  In February 2004, Reali assumed the position of host of Around the Horn.

In the fall of 2014, Reali moved from Washington, D.C. to New York, to continue hosting ATH and joining ABC’s Good Morning America as a correspondent, a role he occupied through 2018. In the fall of 2018, Around the Horn rebranded itself in a new augmented reality studio at Pier 17, South Street Seaport. Now, Reali has the ability to score the argument while also directing the panelists through a dozen different visual filters. The studio holds a special place in Reali’s heart, as he told the ESPN audience on the first day of broadcast: Pier 17 is the site where both of his grandfathers worked unloading bananas off boats prior to World War II.

Before joining ESPN, Reali was a sportscaster for WFUV 90.7 FM in The Bronx, New York. From 1997-2000, he was the voice of Fordham football and basketball and host of New York City’s longest-running sports call-in show, One on One. As a station beat reporter, he covered the New York Yankees, Mets, Giants and Jets.  From 2000 to 2001, he wrote sportscasts for the WB 11’s nightly news. In 2009, Reali wrote a weekly fantasy football column for the Philadelphia Inquirer.

Born in Staten Island, N.Y. and a native of Morganville, N.J., Reali received a Bachelor of Arts degree in both Communication and History from Fordham University.