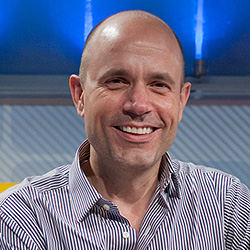 Executive Producer, Around The Horn, PTI and Highly Questionable

Erik Rydholm is the executive producer and creative force behind some of ESPN’s most popular programs –Pardon the Interruption, Around the Horn, Highly Questionable and the TV simulcast of The Dan Le Batard Show with Stugotz.

Rydholm owns and operates the production company Rydholm Projects, Inc., working out of the ABC News Bureau in Washington, D.C.

ATH (M-F, 5 p.m.) hit the airwaves in the fall of 2002. Host Tony Reali scores the arguments – and mutes – a daily panel of four popular sports commentators in this debate and discussion program that continues to post strong ratings and viewership in its lead-in time slot to PTI. ATH has also helped launch the careers of many ESPN voices who have appeared as regular panelists, including Bomani Jones, Pablo Torre, Mina Kimes, Israel Gutierrez and Sarah Spain.

In addition to working with Le Batard on HQ, Rydholm oversees the television simulcast of ESPN Radio’s The Dan Le Batard Show with Stugotz (M-F, 10 a.m. – 1 p.m.). Also based in Miami Beach, the popular program debuted on ESPN in 2013 and features co-host Jon Weiner (Stugotz) and an ensemble cast that has worked with Le Batard since the radio show debuted locally in Miami in 2004.

Rydholm, who works on a contract basis for ESPN, also served as executive producer of Desus & Mero, Viceland’s first daily, late-night show, which debuted in 2016 and has since moved to Showtime. He also produced The Fast Fix political daily for Yahoo! and the Washington Post.

A trusted advisor to ESPN content executives and the ESPN Films leadership team, Rydholm has contributed to many other company projects, including the ESPN 30 for 30 short film The Shining Star of Losers Everywhere. He was an executive producer for the project about Japanese racehorse Haru Urara that won for Best Short Documentary at Hot Docs in 2016.

Prior to ESPN, Rydholm co-founded the popular multimedia financial services company The Motley Fool, which launched in 1993 as a monthly 16-page investment newsletter. He won multiple Webby Awards – including Best Finance Site in 1999 – and he remains a company co-owner.

Before The Motley Fool, Rydholm produced the 9 p.m. Fox News Chicago and was a Chicago-based bureau producer for ESPN. Born and raised in the Windy City, Rydholm graduated from Brown University in 1989 with a degree in Political Science. In addition to his television work, Rydholm is a partner in the Latin America inspired Brooklyn restaurant Colonia Verde.