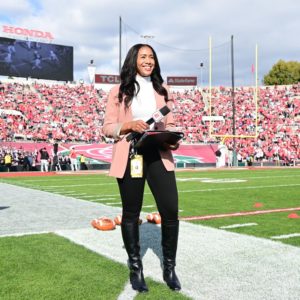 Tiffany Blackmon is a college football sideline reporter who joined ESPN in the fall of 2021. Blackmon previously spent more than five years with NFL Media as a reporter and Atlanta-based correspondent for NFL Network, contributing field reports for NFL Network’s shows, including NFL Total Access, Around the NFL, Path to the Draft, NFL GameDay Morning and more.

Prior to joining NFL Media, Tiffany worked as an anchor and reporter for Comcast SportsNet Houston. Her responsibilities included covering the Houston Rockets and co-hosting their weekly All-Access show, as well as covering the Houston Texans, the University of Texas, Texas A&M and Baylor. Tiffany also served as the host of SportsNet Reports.

Blackmon also worked at the NBC affiliate KFOR-TV in Oklahoma City, where she covered the Oklahoma City Thunder as well as football at the University of Oklahoma and Oklahoma State. Her previous experience includes serving as Sports Director at KXXV-TV in Waco, Texas and Weekend Sports anchor at KPLC-TV in Lake Charles, La.

Born in Attleboro, Mass., and raised in Atlanta, Blackmon graduated from Georgia State University in Atlanta with a degree in journalism and telecommunications. She was a four-year letterwinner for the Panthers in women’s soccer.