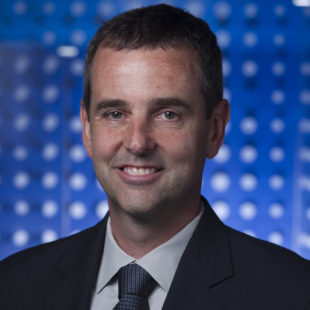 Tom McCollum is an ESPN Senior Coordinating Producer, overseeing studio production for SEC Network, including shows like SEC Nation, SEC Now and The Paul Finebaum Show. Since moving to Charlotte to join SECN in 2016, Tom’s team has launched several new shows, including Thinking Out Loud and Homecoming.

Prior to joining SECN, McCollum spent five years in Austin, where he helped launch Longhorn Network. He maintains oversight of studio production at LHN, including the network’s flagship show, Texas GameDay. In the six years since launch, LHN has won 14 College Sports Media Awards, the most of any network.

Prior to joining the network dedicated to the University of Texas, he worked as a coordinating producer with ESPN’s award-winning Feature Unit.  There he oversaw the first “Baracketology” shoot, the first “Training Days,” and the first “Gruden QB Camp.” He began producing features for Sunday NFL Countdown in 2000, before teaming with Kenny Mayne to launch the Mayne Event in 2002. He produced more than 100 Mayne Events for Countdown, and produced features on 31 of 32 NFL teams. McCollum’s 2006 feature “Katrina Comeback” was nominated for an Emmy, and he has been a part of nine national Sports Emmy-winning projects.

Before joining ESPN in 1997 as a production assistant, McCollum worked at the New Orleans Times-Picayune for the Travel and Living sections. He attended high school in Des Moines, Iowa and graduated from Northwestern University’s Medill School of Journalism in 1994. McCollum began volunteering with Special Olympics in 1990, and met his wife – a fellow volunteer – at an event in Connecticut in 2006.