Stan Verrett, who joined ESPN as an anchor for ESPNEWS in September 2000, moved to the company’s new Los Angeles Production Facility in March 2009 to co-host the 1 a.m. ET edition of SportsCenter with Neil Everett.

Prior to ESPN, Verrett worked as a weekend sports anchor and reporter at WDSU-TV, an NBC affiliate, in his hometown of New Orleans, La.

Verrett is a graduate of Howard University in Washington, D.C., where he was selected as one of the two outstanding graduates in journalism for 1989. He was recognized by Howard in 2020 with the Alumni Award for Distinguished Postgraduate Achievement.

An avid golfer, he lives in the Los Angeles area. Verrett remains a loyal fan of the New Orleans Saints, frequently returning to New Orleans to attend games. 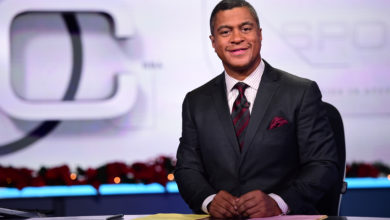