‘All for Hockey’: ESPN Releases New Creative for the NHL’s Return to The Walt Disney Company 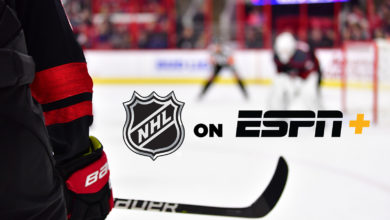 In 2021, The Walt Disney Company, ESPN and the National Hockey League reached a historic and innovative seven-year television, streaming and media rights deal, taking the new partnership from the beginning of the 2021-22 season through the 2027-28 season.

The new deal is highlighted by: exclusive coverage of the Stanley Cup Final on ABC in four of the seven years of the agreement, with the ability to simulcast/megacast on ESPN+ and additional ESPN networks; the return of live NHL action to ESPN networks with 25 exclusive national regular-season games on ABC or ESPN; 75 national regular-season games per season produced by ESPN that will stream exclusively on both ESPN+ and Hulu; half of the Stanley Cup Playoffs on ABC and ESPN each season; and coverage annually of NHL’s Face-off (opening night games), the NHL All-Star Game and Skills Challenge, plus other NHL special events each season.

The NHL debuted on ESPN on Dec. 19, 1979, only about three months after the network went on air. ESPN’s coverage recorded milestones both on and off the ice the first nine seasons, including being the first U.S. network to produce an NHL All-Star Game in 1986. After a four-year absence, the league returned to the network in 1992 and aired for the first time on ESPN2 the following season, days after the channel’s debut. In the years that followed, the NHL played a key role in the expansion of ESPN2, leading to ESPN and ESPN2 celebrating their 1,000th NHL telecast on March 8, 1998. Over the years, ESPN introduced its innovative production elements to hockey coverage including, electronic cut-ins (1980), MaskCam (1998), SkyCam (1998) and more. The network’s last TV rights deal with the league concluded in 2005. Live games and a daily studio show returned to ESPN+ in 2018.