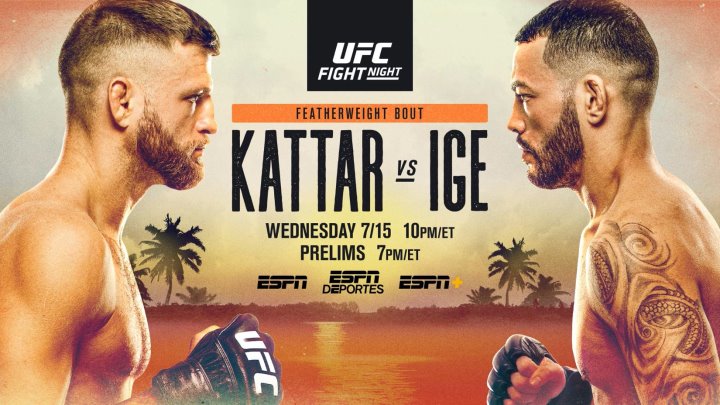 UFC Fight Night: Kattar vs. Ige will air on ESPN and ESPN Deportes in English and Spanish, and be simulcast on ESPN+ (also in English and Spanish), beginning with the Prelims at 7 p.m. ET and the Main Card at 10 p.m. ET. The events will be closed to the public and will be produced with only essential personnel in attendance.

About UFC®
UFC® is the world’s premier mixed martial arts organization (MMA), with more than 318 million fans and 102 million social media followers. The organization produces more than 40 live events annually in some of the most prestigious arenas around the world, while broadcasting to nearly one billion TV households across more than 175 countries. UFC’s athlete roster features the world’s best MMA athletes representing more than 65 countries. The organization’s offerings include UFC FIGHT PASS®, one of the world’s leading streaming services for combat sports. UFC was acquired in 2016 by global entertainment, sports and content company Endeavor, along with strategic investors Silver Lake Partners and KKR. UFC is headquartered in Las Vegas, Nevada. For more information, visit UFC.com and follow UFC at Facebook.com/UFC, Twitter, Snapchat and Instagram: @UFC.

Fans subscribe to ESPN+ for just $4.99 a month (or $49.99 per year) through the ESPN App, (on mobile and connected devices), ESPN.com or ESPNplus.com.  It is also available as part of a bundle offer that gives subscribers access to Disney+, Hulu (ad-supported), and ESPN+ — all for just $12.99/month