Alyssa Lang is a host, anchor and reporter for SEC Network, joining the team in the summer of 2018 and signing a new contract in summer 2019. Lang is the host of Out of Pocket with Alyssa Lang and Thinking Out Loud Presented by Regions, and serves as a sideline reporter for SEC Network college football and basketball. Lang is also one of the hosts of SEC Now, rotating anchor desk duties with network mainstays, Peter Burns and Dari Nowkhah. She co-hosts ESPN Radio’s Primetime with NFL insider Field Yates, airing on Sundays during the NFL season.

Before joining the ESPN and SEC Network family, Lang was a sports anchor and reporter at First Coast News in Jacksonville for two seasons. Prior to her time in the Sunshine State, she worked at WLTX in Columbia, South Carolina, where she covered South Carolina, Clemson, Carolina Panthers, and more. In addition, Lang has had stints at SPEEDTV, GamecockCentral.com and WCNC in Charlotte.

Lang graduated from the University of South Carolina with a degree in Broadcast Journalism in 2015. A native of Huntersville, NC, she loves to travel. 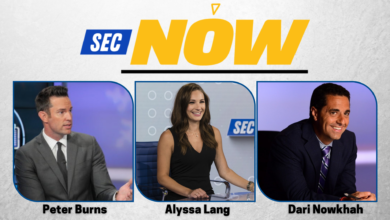