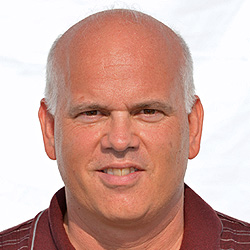 Bruce Watson serves as director during ABC’s telecast of the Indianapolis 500 and other races in the Verizon IndyCar Series. He also directs college football and basketball telecasts for ESPN and previously was director for ESPN’s coverage of the NHRA Drag Racing Series.

In the director role, Watson sits next to the producer in the ESPN production trailer during race telecasts and “calls” the camera shots from a dizzying bank of monitors and camera angles. He also works closely with the operators of the manned and remote cameras in advance of and during race telecasts on locations, angles, etc.

Watson, a native of Havertown, Penn., joined ESPN in 2001. Previously, he was a director for World Sports Enterprises in Charlotte, N.C., from 1996-2000 and worked on motorsports telecasts for WTBS and the former Nashville Network. He also directed for IMS Productions, the video arm of Indianapolis Motor Speedway, in 1997. He joined World Sports as a technical director in 1989.

He began his television career in 1985 as technical director for a local station in Atlantic City, N.J., for two years, and worked for three years as an editor for a production company in Pennsylvania before joining World Sports.