Carolyn Peck originally joined ESPN in 2001 and returned in 2007 as a basketball analyst for both college and professional, including men’s and women’s college basketball, NBA and WNBA. Peck went back to coaching for the 2017-2018 season as an associate head coach at Vanderbilt, and then returned to ESPN shortly after, where she is currently an analyst for ESPN and SEC Network’s women’s college basketball coverage.

One of the most accomplished figures in women’s basketball, Peck returned to ESPN after five seasons as head coach at the University of Florida, where she orchestrated the greatest one-season turnaround in program history (2003-2004). Prior to taking the helm at Florida, Peck was the head coach of the former WNBA franchise Orlando Miracle for three seasons (1999-2001), a stint that included a trip to the 2000 WNBA playoffs.

Through her time at Florida and at Orlando, Peck contributed game and studio analysis for ESPN’s coverage of the WNBA, women’s college basketball regular season and the NCAA Women’s Basketball Championship.

Right before joining the professional ranks as a coach, Peck won the 1999 NCAA Women’s Basketball Championship as head coach of the Purdue Boilermakers, becoming the first African-American women coach to do so, while also earning many coach-of-the-year honors. In addition, Peck has served as an assistant coach for USA Basketball (1997 and 2004), the University of Tennessee (1993-95) and the University of Kentucky (1995-96). 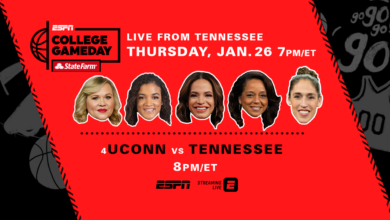 ESPN’s College GameDay Covered by State Farm Heads to Rocky Top for No. 5 UConn at Tennessee on Jan. 26; First of Three Women’s Basketball Stops This Season