Dan Orlovsky joined ESPN in 2018 and is a college football and NFL analyst. He appears on NFL Live and a variety of other ESPN studio programs in addition to calling a weekly ESPN/ABC college football game during the fall.

Orlovsky began appearing on NFL Live in 2019, which led to his more consistent daily role on the show in June 2020. In addition to appearing on ESPN’s weekday NFL news and information show, Orlovsky is a regular contributor to Get Up, SportsCenter, First Take and other ESPN television and radio shows.

A 12-year NFL quarterback, Orlovsky was selected by the Detroit Lions in the fifth round of the 2005 NFL Draft. He also played for the Houston Texans, Indianapolis Colts and Tampa Bay Buccaneers.

A native of Shelton, Conn., Orlovsky attended the University of Connecticut and remains one of the most recognized players in Huskies football history. He led the team to victory in its first-ever bowl appearance at the 2004 Motor City Bowl. He still holds several school passing records, and he was honored twice as the Walter Camp Connecticut Player of the Year.

Prior to joining ESPN, Orlovsky was an analyst for the NFL Network. 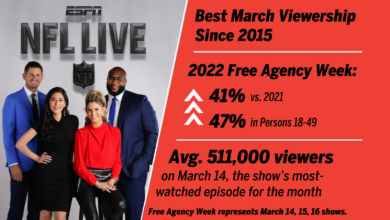 Dan Orlovsky Prepares for an All-Day Football Marathon on ESPN