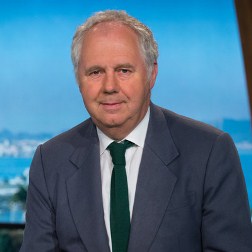 Ian Darke is one of the most recognizable voices in global football. He joined ESPN full-time in September 2010 as the company’s lead soccer voice in the United States.

Darke’s style of commentary is infused with restrained passion, timing and pacing, and his voice is synonymous with some of the seminal moments in televised soccer in the U.S. He first captured the imagination of fans during the 2010 FIFA World Cup in the USA’s come-from-behind effort in a 2-2 tie vs. Slovenia, and in their next match, when a stoppage time goal the Americans to a 1-0 victory over Algeria.

At the 2011 FIFA Women’s World Cup in Germany, Darke again brilliantly captured the game-changing moment during the USA-Brazil quarterfinal match when U.S. forward Abby Wambach scored a miraculous header in the 122nd minute of play. He also provided commentary for the eventual USA vs. Japan final – the action-packed title match won in penalty shootout by Japan following a 2-2 tie.

In 2014, Darke chronicled the U.S. Men’s National Team’s journey through the tournament’s toughest group and its overtime loss to Belgium in the Round of 16 – capped by one of the best World Cup performances by a goalkeeper with Tim Howard’s World Cup-record 16 saves. But it was during Brazil’s 1-7 semifinal loss to eventual FIFA World Cup winner Germany that Darke delivered one of his best televised match commentaries. Alongside Steve McManaman, the pair aptly described the Brazilian national team’s on-field play and relayed the grief and shock that had overtaken the home nation’s fans at Belo Horizonte.

Darke was the lead play-by-play voice for ESPN’s coverage of the 2012 UEFA European Football Championship in Poland/Ukraine, and he will continue in that role as part of ESPN’s presentation of Euro 2016 in France.

Prior to the 2010 FIFA World Cup in South Africa, Darke made his ESPN debut during the 1994 World Cup as a commentator for ESPN and ABC. Upon his return to the company, he was paired with legendary Liverpool FC player Steve McManaman to call matches from Premier League stadiums each week from 2010–2013 – a pioneering concept, at the time, in how the league’s matches were televised in the United States.

Darke joined ESPN from Sky Sports, where he was a soccer and boxing commentator for the London-based sports network from 1992-2010. At Sky, Darke enjoyed a successful career commentating on Premier League, UEFA Champions League and Football League matches, as well as serving as the network’s lead boxing commentator.

In addition to his work with Sky, Darke’s voice became familiar to international soccer fans from his commentaries on the Premiership’s international broadcasts for Trans World International (TWI).  He has also served as a primary host of TWI’s weekly magazine show.

Darke began his broadcasting career at a regional BBC Radio station – Radio Leicester – in 1975.  He moved to BBC’s national service in 1979, where he covered soccer, boxing and athletics.  At BBC Radio, Darke’s distinctive voice, and passionate but measured style of commentary, earned him public acclaim, and he quickly built a profile as a premier boxing announcer in the English-speaking world.  He covered the 1978, 1982 and 1990 FIFA World Cup events for BBC Radio and Eurosport.

While he is known as a great soccer commentator, Darke is also considered one of the UK’s most respected boxing broadcasters.  He has been ringside at major fights such as Muhammad Ali vs. Larry Holmes at Caesar’s Palace (1980), Marvin Hagler vs. Thomas Hearns (1985) and others.

Darke, a trained journalist who began his media career working with regional newspapers in the United Kingdom, writes a weekly column for his hometown (Portsmouth) paper, The News, titled “The Darke Side.”

In the United Kingdom, Darke is the lead football commentator for BT Sport, covering the Barclays Premier League and other major European leagues. 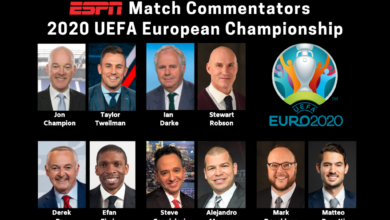