As a player, marketing executive and broadcaster, Debbie Antonelli has been a major influencer in the women’s college basketball circles, and has served as an analyst for ESPN, including games on ACC Network, Longhorn Network and SEC Network.

Her 29-year announcing career also includes games for CBS, Fox Sports Net, Big Ten Network, NBATV, Westwood One, in addition to being an analyst for the Indiana Fever since the WNBA started in 1997. Antonelli became the first woman in nearly 22 years to call an NCAA men’s basketball tournament game when she worked on first-round games in 2017.

The Cary, N.C., native stayed in her home state for her college career at N.C. State University, where she graduated with a double major in business management and economics in 1986. Under the guidance of legendary head coach Kay Yow, the Wolfpack made the NCAA Tournament all four years she played as a forward, as well as two Sweet 16 appearances.

After receiving a master’s degree in sports administration from Ohio University, Antonelli went on to be the director of marketing at University of Kentucky for four years. She then moved on to a similar position at Ohio State University, which set up her successful career. As director of marketing for the Buckeyes, she got women’s basketball games aired on local television, and was also the play-by-play voice for five years.

The recipient of the 2007 Mel Greenberg Award given by the Women’s Basketball Coaches Association (WBCA) to the professional who has best displayed commitment to advancing the role of the media in promoting women’s basketball, Antonelli is also the voice of the Women’s Basketball Hall of Fame and a long-time member of the Board of Directors. She is a lifetime member of the Kay Yow Cancer Fund Board of Directors, selected by Coach Yow to carry out her vision for the fund.

Antonelli is involved with Special Olympics and Unified Partner in several sports including basketball and golf.  In Charleston, S.C., she is one of the founders of the Buddy Walk and is also a parent advocate for Special Education. VanDerveer Inches Closer to History as No. 1 Stanford Women’s Basketball Tips Off on ESPN2, Tuesday, Dec. 15 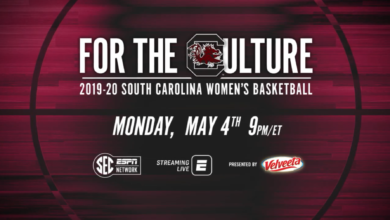 SEC Network Debuts For The Culture Presented by Velveeta on May 4, Reflects on the 2019-20 South Carolina Women’s Basketball Season