Dusty Dvoracek is a college football analyst on ESPN and ABC Saturday games, working along play-by-play commentator Mark Jones and reporter Olivia Dekker. His prior assignment included ESPN Friday Night Primetime Series and ESPNU college football games on Saturdays in his first season with the network. In addition to his duties with ESPN, he is the sports radio host of ‘Monsters of the Mid-Day’ on 98.1FM in Oklahoma City.

Dvoracek played for the Oklahoma Sooners from 2001 – 2005, where he was a two-time captain and two-time Big 12 champion. During his time at Oklahoma, he earned the Jay Myers Award (Outstanding Freshman Student Athlete), the Sooner Schooner Scholastic Award (Outstanding Student Athlete), and was named to the Academic All-Big 12 Team and the All Big 12 and AP All American teams.

In 2006, Dvoracek was drafted 73rd overall in the third round of the NFL Draft by the Chicago Bears, and played with the team for four years.

Prior to joining ESPN, Dvoracek was a college football analyst for Fox Sports Southwest and Fox Sports Oklahoma.

He currently resides in Norman, Okla., with his wife Lacy, his two sons and daughter. 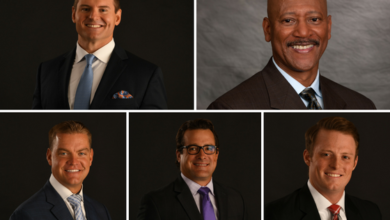