Chris Evert, one of the most accomplished tennis players in history, joined ESPN in 2011 as an analyst, and has since covered all four Grand Slam events – including ESPN’s current unprecedented position of start-to-finish coverage of three – the Australian Open, Wimbledon and the US Open. Evert won 18 major singles championships (two Australian Open, three Wimbledon, and a record six US Open and seven French Open titles), winning at least one each year for 13 consecutive years (1974-1986). She retired in 1989 with 157 singles titles overall, and a career win-loss record of 1,309-146 (.900), the best of any professional player in history.

Evert burst upon the national tennis scene at the age of 15, and a year later made the 1971 US Open semifinals in her first Grand Slam Event. She was voted the AP Female Athlete of the Year four times and in 1985 was voted the Greatest Woman Athlete of the Last 25 Years by the Women’s Sports Foundation. She was a unanimous selection to the Tennis Hall of Fame in 1995. In the past, she worked as an analyst for NBC for 10 years.

The mother of three boys, she has remained close to the game. She operates a tennis academy bearing her name in Boca Raton, Fla., and writes a column for Tennis Magazine. 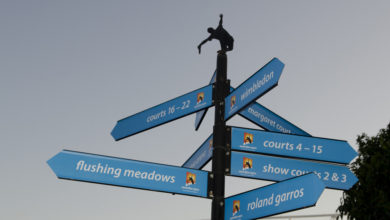