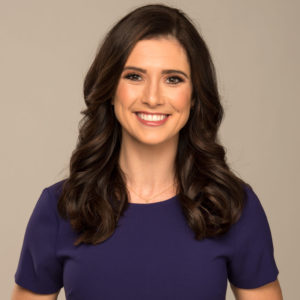 Jen Lada is a reporter and host for ESPN. She appears primarily on College GameDay Built by The Home Depot and College Football Live. A Sports Emmy-winning features reporter, Lada also contributes to ESPN’s storytelling brand SC Featured, Outside the Lines and E:60.

Lada joined College GameDay as a features reporter and College Football Live as a host in 2016. She has contributed many memorable stories to GameDay including the Sports Emmy-nominated “UP Syndrome” about Nick Saban and Tuscaloosa native Walt Gary, who has been a fixture of the Alabama program. A pair of Lada’s GameDay features – “Heart of a Tiger,” about the connection between Auburn and LSU families through organ donation, and “Texas Strong,” the story of former Bevo handler Cuyler Duncan at the University of Texas – also earned College Sports Media awards for Outstanding Sports Feature.

In 2020, Lada earned her first Sports Emmy Award in the Outstanding Short Sports Documentary category for the E:60-produced feature “Hilinski’s Hope” about South Carolina quarterback Ryan Hilinski and how the devastating loss of his brother Tyler impacted his life both on and off the field. The piece has been widely praised for helping others who are battling mental illness.

In addition to “UP Syndrome,” Lada’s 2017 SC Featured “Restart” – about how a racecar driver’s donated heart helped an Army war veteran – was also nominated for a Sports Emmy. Lada’s work with SC Featured also includes a profile of Chicago Cubs first baseman Anthony Rizzo, on how he overcame cancer at the age of 18. She also previously hosted the SC Featured audio podcast.

Lada’s work on SC Featured has led to other feature opportunities with Sunday NFL Countdown and a pair of Special Olympics World Games – Austria (2017) and Dubai/Abu Dhabi (2019), both of which she covered for ESPN.

Since joining the company in July 2015, Lada has made guest host appearances on a variety of ESPN Radio and television shows, including Baseball Tonight, First Take and SportsCenter. She has contributed to ESPN’s digital platforms and she was part of ESPN’s Department of Highlights. She also created content for ESPN Radio’s digital platforms and contributed to SportsCenter and Mike and Mike.

Prior to ESPN, Lada was an anchor and reporter for two and a half years in the Chicago area for Comcast SportsNet. At CSN Chicago, she was the reporter on the Bears and White Sox pro sports beats. She also anchored SportsNet Central and was the host of High School Lights, White Sox pre- and postgame shows, and the trivia show Beer Money.

Lada previously worked as a reporter and anchor for WITI-TV in Milwaukee and WREX-TV in Rockford, Ill. At WITI, she earned the Best Sportscast 1st Place honor in 2011 from the Wisconsin Broadcasters Association. In addition, her story about a Milwaukee woman who ran across the United States to raise awareness for Multiple Sclerosis was named Best Feature 1st Place by the Milwaukee Press Club.

A native of Spring Grove, Ill., Lada graduated from Marquette University’s College of Communications with a degree in Broadcast Electronics.

Away from work, Lada is an endurance athlete, cyclist and runner. She has run the Chicago Marathon four times and the NYC Marathon (2018) while also completing dozens of triathlons. Lada is married to Fox Sports Wisconsin host/reporter Dario Melendez and has three children, Chase, Layla and Keira. 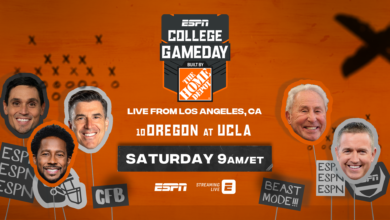