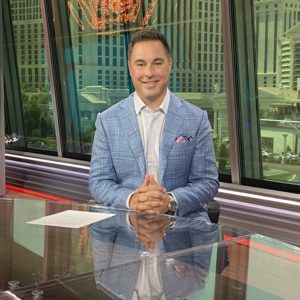 Joe Fortenbaugh joined ESPN on a fulltime basis in August of 2020 after having been a contributor to the network’s sports betting content for more than a year. Fortenbaugh appears regularly on ESPN’s sports betting news and information program Daily Wager as well as in other programs and segments on television, radio and digital platforms.

Fortenbaugh, who has contributed to Daily Wager as an analyst since the show began, works from the ESPN studio at the The LINQ Hotel + Experience on The Strip in Las Vegas.

Fortenbaugh’s resume includes co-founding NationalFootballPost.com, where he was a writer and manager from 2008-2014; hosting “The Sharp 600″ sports betting podcast; and appearing as a sports betting analyst on dozens of radio shows around the country. He lived and worked in Las Vegas from 2011-2014 with the goal of meeting and learning from as many bookmakers and professional gamblers as possible.

While still in college, Fortenbaugh won a free cruise to play in the Party Poker Million IV in 2005, and then won $10,426 on the cruise when he finished 126th out of 735 players in the tournament

He had been a morning radio host on “95.7 The Game” in San Francisco from 2014 until joining ESPN.

A graduate of Penn State, Fortenbaugh went on to graduate from Thomas Jefferson School of Law. He is a native of Allentown, PA.