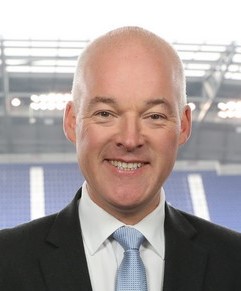 Jon Champion is a soccer commentator for ESPN. One of the United Kingdom’s most acclaimed and respected football announcers, he first began working for ESPN in 2009 in the U.K. In 2019, Champion joined ESPN full-time and moved to the United States to be the lead play-by-play voice for Major League Soccer.

Over the past 20 years, Champion’s voice has become synonymous with English football around the world. From the inception of the English Premier League until he moved to the U.S., Champion was heard on a weekly basis commentating on top matches, and he has provided the soundtrack to some of the sport’s most memorable moments.

Champion began his broadcasting career with BBC Radio in the 1980s, covering his first World Cup in Italy at the age of just 25. In 1995, he was invited to join the commentary team on the iconic BBC TV show ‘Match of the Day’. In 2001, he transferred to ITV, where he called games in the Barclays Premier League and the UEFA Champions League in addition to seven League Cup Finals.

In 2007, Champion was appointed senior commentator by Setanta Sports where he received widespread critical acclaim as the voice of the Premier League and the England National Team.

Champion’s first assignment on ESPN’s U.S. domestic networks was during the 2014 FIFA World Cup in Brazil. He has since called the UEFA European Championship 2016, International Champions Cup (ICC) and other events.

In addition to his football work, Champion has been behind the microphone at three Olympic Games and World Cups in both rugby and cricket. Since 2008, he has been the main commentator for one of the world’s most popular football video games, ‘Pro Evolution Soccer’.