Former Louisville volleyball star Katie George joined the ACC Network at its launch in 2019. She serves as a reporter during ACC Network Primetime Football telecasts, and contributes to coverage across many ACC sports.

Prior to joining ESPN, she worked WDRB in Louisville as the station’s sports anchor and reporter. Most recently, George was the Milwaukee Bucks’ team sideline reporter for the 2018-19 season.

George, the 2015 ACC Player, Setter and Scholar-Athlete of the Year, helped Louisville to conference championships in three different leagues. She was a three-time first team all-conference selection earning accolades in the American (2013) and the ACC (2014 and 2015). Also, in 2015, George was crowned Miss Kentucky USA and went on to finish in the top 11 of the Miss USA pageant while receiving the event’s “People Choice Award.” 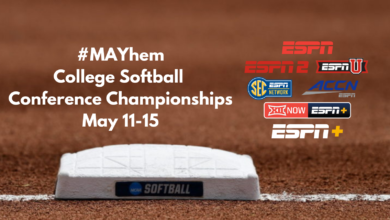