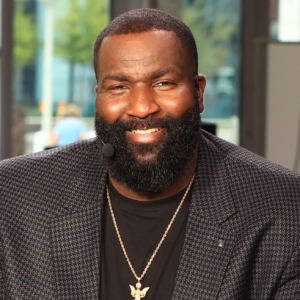 Known as one of the NBA’s most intimidating enforcers and also one its most compassionate and legendary teammates, Kendrick Perkins has had a tremendous basketball career playing in the league for 14 years. Now a sought-after broadcast analyst, Perkins is using his big personality and strong player relationships to deliver unique basketball insights as someone who can tell us not just what the players will do, but how they feel. He has become a highlighted NBA analyst featured on numerous ESPN shows including NBA Countdown, NBA Today, Hoop Streams, First Take and Get Up.

Kendrick was drafted to the NBA straight out of Clifton J. Ozen High School where he captured one state championship. Perkins played for numerous NBA organizations throughout his career: the Boston Celtics, Oklahoma City Thunder, Cleveland Cavaliers and New Orleans Pelicans. Perkins captured his first NBA title with the Boston Celtics in 2008 as the starting center. In 2011 he went on to play for OKC when he lead the thunder to the NBA Finals the following year. After his 4 year swing in Oklahoma, Perkins signed with Cleveland and also reached the finals again in 2015 and then 2018. On April 15th, 2019 Perkins announced his retirement from the NBA.