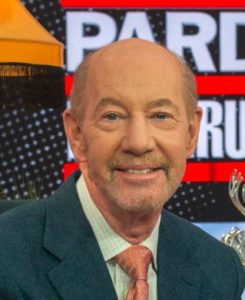 Tony Kornheiser is co-host of Pardon the Interruption (PTI) and one of ESPN’s most popular on-air personalities. The former Washington Post sportswriter and columnist also worked as an ESPN Radio host and Monday Night Football commentator.

Kornheiser and his former Post sports colleague Michael Wilbon have co-hosted PTI for nearly 20 years – since the show’s debut on September 22, 2001. Highlighted by the type of discussion and verbal sparring the two engaged in for years at The Post, the popular weekday sports news and commentary show features wide-ranging discussion of the day’s news and events. PTI earned Sports Emmy awards in 2009, 2016 and 2017 in the Daily Studio category and the show is among the industry’s most-watched studio shows.

Daily podcast editions of PTI are available, and Kornheiser and Wilbon have a segment that appears in the opening minutes of the 6 p.m. edition of SportsCenter that follows their show.

From 2006-08, Kornheiser was a commentator on ESPN’s Monday Night Football – just the third non-former player in the booth, joining the legendary Howard Cosell and comedian Dennis Miller. Kornheiser helped MNF become the most-watched series in cable television history in its first three years on ESPN. During that time, he and Wilbon also took PTI on the road on Mondays during the NFL season from the site of ESPN’s games.

Kornheiser’s association with ESPN goes back to the 1990s when he was a frequent contributor to the Sunday morning roundtable program The Sports Reporters. He then joined ESPN in November 1997 as an ESPN Radio host. His Tony Kornheiser Show premiered January 5, 1998 and continued through March 2004.

When the Tony Kornheiser Show launched in 1992, it aired exclusively on WTEM-AM in Washington, D.C. After six years of national distribution on ESPN Radio, the show returned to the Nation’s Capital on ESPN 980 (WTEM-AM) in 2004. After a brief hiatus while Kornheiser was on MNF, the program resumed in February 2007 on Washington Post Radio and moved back to ESPN 980 from 2009-2016.

Kornheiser began working at The Washington Post in 1979 and wrote for the paper (and its website) until 2013. He started as a Post sports columnist in 1984 and for many years also wrote for the Style section, attracting a large following for his humorous musings on topics ranging from presidential politics to his teenaged children, his elderly father and the behavior of his dog.  These columns were compiled in three books – Pumping Irony, Bald as I Wanna Be, and Back for More Cash.

Kornheiser graduated from Harpur College (now Binghamton University) in 1970 with a degree in English. He began his career in journalism right out of college at Newsday before going to the New York Times in 1976.

In 2017, Kornheiser and Wilbon received the National Press Club’s most esteemed prize, the Fourth Estate Award, recognizing journalists who have made significant contributions to the field. The duo also received The Washington Post’s prestigious Eugene Meyer Award in 2007, which recognizes employees who exemplify the principles embodied by the paper’s former owner and publisher – journalism, business sense and hard work. 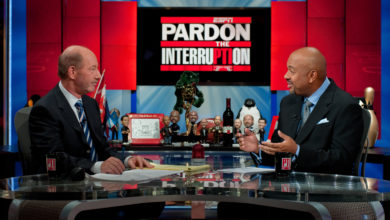