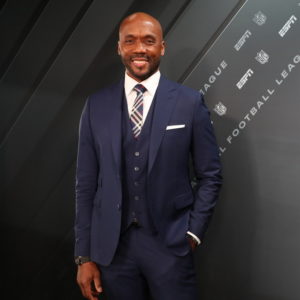 Louis Riddick, one of the most well respected voices in the industry, was named a Monday Night Football analyst in August 2020. The former pro scout and director of pro personnel, who also played in the NFL, originally joined ESPN in May 2013 as an NFL Front Office Insider.

Prior to joining the MNF booth, Riddick shared his insights on MNF halftime and postgame shows alongside Suzy Kolber and Steve Young from 2018-2019. In 2019, he also joined Kolber, Young, Randy Moss and Adam Schefter on Monday Night Countdown’s main set and called college football games on Friday nights alongside Dave Flemming and Paul Carcaterra.

In addition to his role on MNF, Riddick also contributes to ESPN’s signature NFL shows: Sunday NFL Countdown, Monday Night Countdown and NFL Live, as well as SportsCenter and ESPN Radio. He is a key contributor to ESPN’s coverage of Super Bowl week, the NFL Scouting Combine and the NFL Draft, where he has appeared on ESPN’s main set for the entirety of the event since 2016. Riddick made his NFL Draft television debut in 2015 when he joined ESPN’s main set for Round 1. He has also covered the NFL Draft on ESPN Radio (Rounds 2-3 in 2015 and Rounds 1-3 in 2014).

A native of Quakertown, Penn., Riddick graduated from the University of Pittsburgh with a bachelor of arts in economics. At Pitt, he was a four-year letterman, a two-time Academic All-America and a team captain his senior season. As an alumni, he was the keynote speaker at the Pitt Football Kickoff Luncheon in August 2018.

Riddick was a USA Today and Parade Magazine All-American at Pennridge High School as a prep senior.