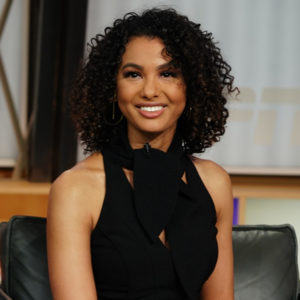 Malika Andrews is a journalist as well as an NBA Reporter and host of ESPN’s weekday NBA studio show, NBA Today (2021), covering the league nationally. Her work has appeared across multiple ESPN platforms including ESPN.com, SportsCenter and ESPN Radio. Andrews made her debut as a sideline reporter during the 2019-20 season at the ESPN World of Sports Complex in Florida, serving as a sideline reporter throughout the NBA Playoffs and making her one of the youngest sideline reporters ever for a Conference Finals telecast. Andrews was one of the first reporters on ground to report from the NBA’s temporary Florida campus after the league’s decision to resume the season following a 4 month hiatus due to outbreak of COVID-19.

Highlights from her newspaper career include traveling to Lake Tahoe as part of a team of journalists that reconstructed the events between Donald Trump and Stormy Daniels. She also reported on the impact of the Sonoma County wildfires on the equine industry during fall 2017. Additionally, Andrews has covered a Super Bowl, and looked at how the Larry Nassar sexual assault case affected children’s gymnastics.

A native of Oakland, Calif., Andrews attended the University of Portland, where she earned a bachelor of arts degree and graduated with honors. While at the University of Portland, Andrews served as the editor-in-chief of The Beacon, the university’s student newspaper. She received awards from the Society of Professional Journalists, the National Association of Black Journalists, and the Columbia Scholastic Press Association for her work. In 2016, Andrews won the Best Writer Award among Oregon college students.

Andrews is a member of the National Association of Black Journalists and sits on the NABJ Sports Task Force Scholarship Committee. She was honored with the 2021 NABJ Michael J. Feeney Emerging Journalist of the Year Award.