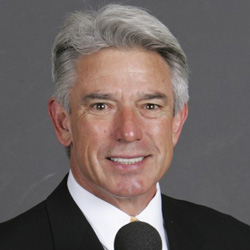 Buck Martinez re-joined ESPN in 2002, following a one-year stint as manager of the Toronto Blue Jays, and currently serves as analyst on select ESPN Major League Baseball telecasts.  He previously worked for ESPN from 1992-2000.  Martinez, a 17-year Major League catcher, also calls 60 games a season as analyst for the Baltimore Orioles on Comcast SportsNet.

For the past 11 years, Martinez has been involved in the rookie career development program, held in conjunction by Major League Baseball and the MLB Player’s Association.

He previously was an analyst for the Toronto Blue Jays on The Sports Network (TSN) and a reporter for The Manager’s Show and Sports Desk on TSN (1986-2000).  In addition, he has hosted a half-hour special The Boys of Winter, and Knockout, a half-hour game show.

His radio experience as a color commentator for Telemedia Radio Network (1982-88) includes the World Series, the American League Championship Series and the All-Star Game. He has also served as post-game analyst for Telemedia’s regular season Major League Baseball coverage.

Martinez has written two books, both about seasons with the Toronto Blue Jays entitled The Last Out (1986) and From Worst to First (1985).