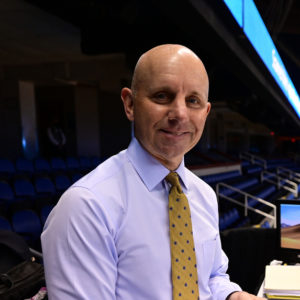 Sean McDonough is one of sports television’s most versatile broadcasters. He is a leading play-by-play commentator for ESPN college football and basketball games in addition to calling the NHL, the PGA Championship and the annual Par 3 Contest at The Masters. McDonough has covered the World Series, NCAA Final Four, the Olympic Games, Monday Night Football and all four major golf championships, among other marquee events during his accomplished career.

In 2021, McDonough was named lead play by play announcer for the NHL on ESPN and ABC, providing commentary for regular season and playoff games (including the Stanley Cup Final) as part of The Walt Disney Company’s return to the sport.

A longtime voice on ESPN college sports, McDonough calls a premier ESPN/ABC college football game each week, as well as one of the College Football Playoff Semifinals, and the National Championship on ESPN Radio.

During the college basketball season, McDonough calls ACC Big Monday games. He has also called the NCAA Final Four on four occasions for ESPN International, including the past five years alongside Dick Vitale and Jay Bilas. For many years, McDonough, Bilas and Bill Raftery called Big Monday BIG EAST games for ESPN. Their work included the historic six-overtime Syracuse-UConn BIG EAST Tournament game at Madison Square Garden in 2009. The telecast won the Global Media Award for “Best Live Game or Event” as presented by the National Academy of Television Arts and Sciences that year.

McDonough has been with ESPN since 1989 – with the exception of 1996-99, when he worked exclusively for CBS. Before being named to the MNF booth, he called Saturday afternoon ABC college football games from 2000-2015. In 2015, he had arguably the signature call of the season on the game-winning punt block and touchdown return as time expired in Michigan State’s miraculous victory over archrival Michigan. For 2015, Sports Illustrated named McDonough and partner Chris Spielman the Broadcast Team of the Year in the annual SI Media Awards.

A leading voice in ESPN’s golf coverage, McDonough serves as a hole announcer and host for the annual PGA Championship and is the voice of the annual Par 3 Contest at The Masters. He was also previously part of ESPN’s presentation of the U.S. Open, The Open Championship and other golf events.

Throughout his three decades with ESPN, McDonough has also voiced Major League Baseball Monday Night Baseball telecasts and provided play-by-play for tennis, the College World Series, and he has called the national championship game in college lacrosse, soccer and hockey. From 2013-15, he also called NFL games for ESPN Radio.

McDonough was the television play-by-play announcer for the Boston Red Sox from 1988-2004, during which time he was honored four times with the New England Sports Emmy Award for Outstanding Play-by-Play. In 2019, he rejoined the Red Sox as a member of their radio broadcast team.

McDonough spent 10 years at CBS Sports and was the lead college football play-by-play announcer from 1997-99. In 1992 and 1993, he and Tim McCarver formed the network’s lead Major League Baseball broadcast team, calling the All-Star Game, the National League Championship Series and the World Series. He provided historic calls, including Atlanta’s Sid Bream’s scoring of the winning run in game 7 of the ’92 NLCS and Joe Carter’s series-ending walk-off home run in game 6 of the 1993 World Series for the Toronto Blue Jays.

During his decade at CBS, McDonough provided commentary for a diverse array of sporting broadcasts, including men’s and women’s college basketball, NFL, The Masters and PGA Championship, and US Open Tennis. He worked 10 NCAA men’s basketball tournaments, and he contributed to CBS’ coverage of the Olympic Winter Games, calling the bobsled and luge competitions in 1992 and 1994 and ice hockey in 1998.

In 2014, McDonough was named to the Hall of Fame for WAER, Syracuse University’s noncommercial radio station where he began his sports broadcasting career as a student. The Sports Media Center at Syracuse’s S.I. Newhouse School of Public Communications also honored McDonough in July 2016 with the Marty Glickman Award. Presented annually to a Newhouse alum, “The Marty” recognizes excellence in the field of sports media. In 2019, he received the George Arents Award, the highest alumni honor bestowed by Syracuse University. In 2021, he was selected for induction into the Massachusetts Broadcasters Hall of Fame.

McDonough’s father is the late Will McDonough, the legendary Boston Globe sportswriter who worked for NBC and CBS Sports. He also has two brothers with prominent roles in professional sports – Terry, Senior Personnel Executive for the NFL’s Arizona Cardinals and Ryan, former general manager of the NBA’s Phoenix Suns. HBO Real Sports profiled the three McDonough brothers in September 2017.

In 2012, McDonough was diagnosed with Superior Canal Dehiscence Syndrome (SCDS), a rare condition that required surgery to repair a hole in the bone near his left ear. After a successful procedure and recovery, McDonough continues to raise awareness for SCDS.

McDonough’s annual “Sean McDonough Celebrity Golf Classic” has raised more than $4.2 million for children’s charities throughout Massachusetts and for a fund established at Brigham and Women’s Hospital to support research into cardiac amyloidosis, the disease that claimed the life of Will McDonough in 2003.