Patrick McEnroe, who enjoyed success playing tennis on both the collegiate and professional levels, serves as a tennis commentator for ESPN.  He often serves as a match analyst, but also calls play-by-play – especially during the US Open when he is paired with his older brother John – and can be seen as either a studio host or analyst.  He first worked for ESPN on a limited basis in 1995 and ’96 before beginning a more extensive schedule of assignments in 1997.  He also worked for CBS Sports from 1996 – 2008, most notably at the US Open.

McEnroe has also parlayed his experiences on and off the court around the sport – along with his personality, contacts and the respect he’s earned – into important roles with the United States Tennis Association (USTA). In December 2000 was named the 38th U.S. Davis Cup captain, winning the title in 2007 for the first time since 1995. He resigned from that position in September 2010, having served in the role longer than anyone in history. In April 2008, he was named to the newly created position of General Manager, USTA Elite Player Development, as part of a new strategic direction for the development of future American champions (title later changed to General Manager, Player Development).  He stepped down from that role in September 2014. He also was coach of the 2004 U.S. Olympic men’s tennis team.

As a junior player, McEnroe partnered with his current ESPN colleague Luke Jensen to win the French Junior doubles and the USTA Boys’ 18 National and Clay Court titles in 1984.  He also made his first impact on the professional tour that year, teaming up with brother John to win the doubles title at Richmond, Virginia.  A three-time singles All-American (1986-88), he led Stanford to NCAA titles in 1986 and 1988.

Most of McEnroe’s professional success came in doubles, with 16 titles and reaching a career-high ranking of #3 in April 1993.  He won the men’s doubles gold medal at the 1987 Pan American Games with Jensen, the French Open men’s doubles title in 1989 with Jim Grabb and the Paris Indoor with his brother John in 1992.  In 1991, he was also runner-up in the doubles at the Australian Open, partnering with his former Stanford teammate David Wheaton.  In the Davis Cup, McEnroe represented his country as a doubles player in 1993, 1994 and 1996.

McEnroe’s first career singles final came in 1991 at Chicago, where he faced his brother John.  John won the match 3-6, 6-2, 6-4 for his 77th and final singles title.  (This was the second time in tour history where two brothers faced each other in a tournament final, after Emilio Sánchez and Javier Sánchez met in the Madrid final in 1987.)

McEnroe’s best Grand Slam singles performance came at the 1991 Australian Open, where he reached the semifinals before being knocked out by eventual champion Boris Becker.  (Commenting on his fellow semifinalists, he quipped to the press: “It’s just like you all expected – Edberg, Lendl, McEnroe and Becker”.)

McEnroe’s singles career peaked in 1995 when the righthander reached the quarterfinals of the US Open and reached a career-high ranking of 28 in the world.  That year, he won the men’s singles at the Sydney Outdoor Championships, his first (and only) career singles title. He also had some notable Grand Slam singles results that year – beating Boris Becker in the first round of the Australian Open (before eventually losing in the fourth round), and then reaching the quarterfinals of the US Open where he lost to Becker in an epic four-hour and seven-minute four set marathon.

Perhaps McEnroe’s most memorable – if inglorious – career moment came as a catalyst of tennis legend (and older brother John’s own rival) Jimmy Connors’ legendary performance at the 1991 US Open.  In the first round, McEnroe led the five-time winner Connors – who was then ranked 174 and entered the tournament with a wild card – two sets and up 3-0 in the third.  Connors came back to win in five sets, walking off the court at 1:35 a.m., after 4 hours and 18 minutes of play.  Connors went on to make an improbable run to the semifinals, losing to eventual champion Stefan Edberg, including yet another late-night drama-filled comeback, this time on his 39th birthday, downing Aaron Krickstein in the fourth round, 3-6, 7-6, 1-6, 6-3, 7-6.

Born July 1, 1966, the New York native was graduated from Stanford University in 1988 with a bachelor’s degree in political science.  He is married with three daughters. 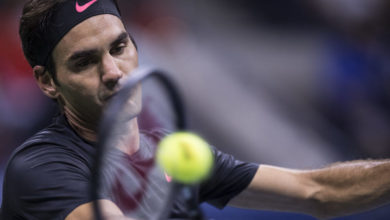