Long a familiar face on SportsCenter, as of April 2016 Chris McKendry focuses on the sport she grew up loving and playing, tennis.  She hosts ESPN’s coverage of the Australian Open, Wimbledon and US Open.  She previously also worked the French Open.

McKendry joined ESPN in 1996 as a SportsCenter anchor, shifting to ESPNEWS for the 1997 launch of the 24-hour sports news network.  She returned to SportsCenter later that year, co-hosting the weekend morning and weekday 6 p.m. editions.  From its debut in August 2008, Chris McKendry co-hosted the mid-day SportsCenter on ESPN.

Prior to joining ESPN, McKendry had been at WJLA-TV, the ABC affiliate in Washington, D.C., where she was a sports reporter, as well as the first woman to work as a television sports news anchor in the market (1994-96).  In June 1996, she received a regional Sports Emmy in the Best Sports Segment Category for “NFL 101,” which illustrated how to watch football.  While at WJLA-TV, McKendry also co-hosted Redskin Magazine, a one-hour, live pregame show.   In 1996, she was sideline and feature reporter for TNT and TBS during the NBA Playoffs.

Born in Philadelphia, McKendry was graduated from Drexel University in 1990 with a bachelor’s degree in Humanities.  A dean’s list scholar for three years, McKendry attended Drexel on a tennis scholarship.  She now serves on the school’s Board of Trustees. 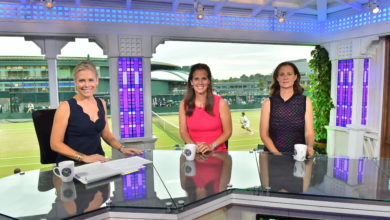