Veteran broadcaster and Olympic athlete Paul Sunderland returned to ESPN in 2012 as a play-by-play announcer for Men’s basketball and volleyball on Longhorn Network.

Sunderland began his broadcasting career in 1985, following an 11 year stint as an Olympic athlete. The personal highlight of his athletic career was being named USA Volleyball player of the year in 1982, and he won a Gold Medal in Volleyball at the 1984 Games in Los Angeles.

Since that time, Sunderland has built one of the most successful and versatile careers in sports broadcasting. He has worked extensively in his sport of volleyball, as well as in basketball, and covered Pac-10 basketball on ESPN starting in 1993.

Sunderland was subsequently hired by NBC to cover a myriad of sports including the NBA, WNBA and a variety of Olympic sports. He has covered the Summer Games for NBC since 1992. Later, Sunderland expanded his activities to the studio where he served as an anchor on the Fox Sports Network.

In 2000, Sunderland made history by becoming the second announcer ever hired for play-by -play in the history of the Los Angeles Lakers. He continued in this role until 2005. For his work covering the Lakers, he was twice recognized with Emmy Awards. Since 2005, Sunderland has returned to covering Pac-12 Basketball, Volleyball and Track and Field for NBC and Universal Sports.

He played college basketball at the University of Oregon before graduating from Loyola-Marymount University. Athletic achievements in the family do not end with Sunderland, as his wife, Maud-Ann, was an Olympic fencer and his son Leif has been a member of the University of Virginia varsity tennis team. 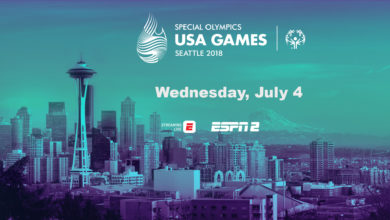