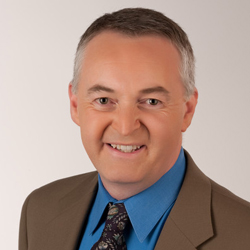 A familiar voice to ESPN viewers around the world, Scotsman Derek Rae is one of the most distinctive and versatile football commentators on television. He has commentated on international soccer for more than twenty years and currently works for BT Sport in the UK as lead voice for Scottish football as well calling the Bundesliga, Serie A, Ligue 1 and the Europa League.

Rae will return to provide commentary during ESPN’s presentation of Brazil 2014, his seventh FIFA World Cup.

A former British Sports Broadcaster of the Year, Derek Rae is best known to viewers in the United States as the popular main voice of the UEFA Champions League on ESPN from 2003 to 2009. Rae also provided play-by-play for ABC/ESPN’s coverage of the UEFA European Football Championship in 2008 and 2012, in addition to being a member of the award winning team that called the 2010 FIFA World Cup.

After several years based at ESPN headquarters, Rae relocated to London, initially as a key member of the on-air team at ESPN UK, commentating on Scottish, English and European football. In addition to his work for BT Sport, Rae has also called FA Cup games for ITV and the Champions League for STV.

Rae’s professional broadcasting experience dates back to 1986, when he made his debut with BBC Scotland, while still a student at Aberdeen University.  The following year he was named “Sony British Sports Broadcaster of the Year” for his work as a soccer commentator.  While with BBC Scotland, Rae was assigned to matches in 19 different countries, and was behind the microphone at the 1990 FIFA World Cup in Italy.

After leaving the BBC in 1991, Rae moved to Boston, initially to serve as a Venue Press Officer for the World Cup USA 1994 Organizing Committee.  In 2010, he moved back to the United Kingdom to focus primarily on his role with ESPN UK.