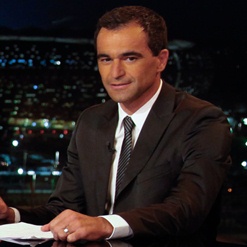 Roberto Martinez, a Spanish former professional footballer and current manager of Everton FC in the Barclays Premier League, serves as a soccer studio analyst for ESPN on marque events such as the FIFA World Cup, FIFA Confederations Cup and UEFA European Football Championship.

Martinez made his ESPN debut as a studio analyst during the company’s award-winning presentation of the 2010 FIFA World Cup in South Africa.  He was widely praised for his insight and knowledge of the game.  He returned to ESPN in 2012, providing analysis from Ukraine on the network’s presentation of the UEFA European Football Championship in Poland and Ukraine.

Martinez has 21 years of experience as a player and coach at the professional level. His playing career included tenures with Balaguer, Wigan Athletic, Motherwell, Swansea City, and Chester City, before moving into management.

Martinez was named the manager at Everton FC in June 2013, taking over the team from David Moyes who replaced legendary Sir Alex Ferguson at Manchester United.

Martinez signed a contract to become the manager of Wigan Athletic in June 2009. Upon his arrival at the Barclays Premier League team, Martinez quickly established himself as one of the best young minds in the ranks of European football managers.  He spent four Premier League seasons at Wigan.

While Martinez and Wigan’s management struggled to revamp the clubs financial outlay, he guided the team to finishing 16th, 16th, 15th, and 18th, as well as winning the FA Cup in 2012-2013 season – his last season with the club.

Prior to Wigan Athletic in 2007, Martinez’s former club Swansea City offered him the position of manager after a brief stop playing with Chester City.  He accepted the offer and immediately brought success to the team – leading Swansea to promotion into the Championship in April 2008, barely under two seasons with the club.  On the strength of his team’s promotion, Martinez received the League One Manager of the Year Award for leading Swansea City to the title in May 2008.