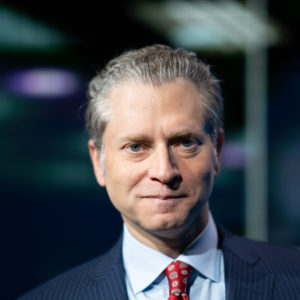 One of ESPN’s most respected and longest-tenured personalities, Jeremy Schaap has been with the network since 1994. He hosts both E:60 and Outside the Lines, ESPN’s showcase journalism shows, as well as the award-winning weekly radio show and podcast The Sporting Life.

In 2018, Schaap co-directed 42 to 1, the acclaimed 30 for 30 documentary about Buster Douglas, who in 1990 upset Mike Tyson to win the undisputed heavyweight championship.

But it has been Schaap’s reporting on sports issues around the world, especially those at the intersection of sports and society at large, focusing on human rights, for which he is perhaps best known.

In 2015, Schaap won the prestigious Robert F. Kennedy Award for reporting on human rights and social justice issues, a first for ESPN. The RFK Center honored Schaap for his story exposing the plight of migrant laborers in Qatar, who live and work in inhumane conditions, even as they build the infrastructure for the 2022 World Cup. Schaap has also been lauded for the 2015 E:60 documentary he reported and hosted on FIFA under its longtime president, Sepp Blatter.

Schaap has also won two national Edward R. Murrow Awards as well as a Peabody Award, two National Headliner Awards and 13 national Sports Emmy Awards. He is the author of Cinderella Man: James J. Braddock, Max Baer and the Greatest Upset in Boxing History, a New York Times bestseller which The Economist called, “A classic of its kind,” and Triumph: The Untold Story of Jesse Owens and Hitler’s Olympics, which Sports Illustrated called “a vivid portrait not just of Owens but of ’30s Germany and America.”

In 2006, Schaap won the national Sports Emmy Award for writing—an award named for his father, Dick Schaap—for a memorable profile of Bobby Fischer. In 2018, thirteen years after the story first aired, Tablet Magazine wrote, “Schaap’s showdown with Fischer is still powerful because it’s one of modern journalism’s most compelling moments of anti-closure, resonating because it draws attention to what we’ll never get to learn.”

Schaap’s three national Sports Emmy Awards in journalism recognized stories he reported on a Serbian basketball player accused of a brutal assault, an Israeli soccer team’s anti-Muslim fans and child fighters in Thailand risking their lives to support their families.

It was also Schaap who conducted the first interview with Hall of Fame coach Bob Knight after he was fired by Indiana University in 2000. In the New York Post, Phil Mushnick called the interview, which turned confrontational, “A slam dunk… one that should be stored in the annals of sports broadcast journalism.”

It was Schaap, too, who conducted the first interviews with Darryl Strawberry, then with the New York Yankees, after he was diagnosed with colon cancer; with Plaxico Burress of the New York Giants, after he shot himself in a New York City nightclub; and with Manti Te’o, the Notre Dame linebacker, after it was reported that his supposed girlfriend had never existed.

In February 2003, Schaap broke the story of a pattern of misconduct by the University of Georgia’s basketball coaching staff. The investigation led to Georgia’s withdrawal from the SEC and NCAA tournaments and the departure of head coach Jim Harrick.  John Jackson of the Chicago Sun-Times wrote, “The report was the kind of first-rate reporting rarely seen on TV. Jeremy Schaap’s reporting was fair and balanced.”

In 2011, Schaap was honored by the United Nations with a special commendation for a report on so-called corrective rape, the sexual attacks committed against lesbians in South Africa. In 2006, Schaap received the annual journalism award of the National Association for Multi-Ethnicity in Communications, for a story on the Morgan State lacrosse team, the only lacrosse team ever fielded by a historically black college.  In 2001, Schaap was honored by the Columbia University Graduate School of Journalism for his two-part story on a white Florida high school football coach whose use of a racial epithet sparked a local furor.  And in 2015, Schaap won a PRISM Award for reporting on addiction issues, for a story about Cowboys’ tight end Jason Witten and his abusive father.

Born in New York City, Schaap is a graduate of Cornell University and resides in Connecticut.