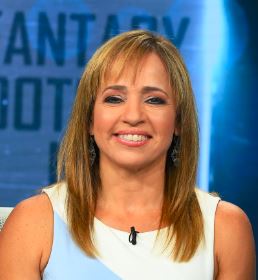 Bell has been part of the Sunday morning Fantasy Football Now pregame program since she joined ESPN and part of the Fantasy Focus Football podcast since its inception in 2008. She started working on the podcast as a contributor multiple days per week before her promotion to co-host alongside Matthew Berry and Field Yates in 2016.

In May 2020, Bell and ESPN’s E:60 profiled Washington quarterback Alex Smith’s year-long rehabilitation from a devastating and life-threatening leg injury. With unprecedented access to Smith, his family and his medical team during the recovery, Bell spearheaded the multi-platform Project 11 which included a primetime television special and an ESPN.com feature, both of which she reported.

Prior to joining ESPN, Bell worked for Kaiser Permanente in San Jose, Calif., and taught at the Kaiser Permanente Northern California Orthopedic Manual Physical Therapy Fellowship. She has held teaching positions in the physical therapy programs at Samuel Merritt College and the University of Kansas and has lectured nationally on various topics. She has also served as a consultant for athletes and performing artists with complex conditions.

Bell was elected to positions in the American Academy of Orthopedic Manual Physical Therapists (AAOMPT) and was heavily involved in the early stages of developing standards for credentialing of post-professional residency and fellowship programs. She remains active in both the AAOMPT and the American Physical Therapy Association (APTA).

Bell has received many industry honors and awards. In 2019, the Vincera Foundation honored her with the Vinci Award for Sports Medicine Journalism. She was also elected to the Fantasy Sports Writers Association (FSWA) Hall of Fame in 2017, becoming the organization’s first female inductee. Bell was also named a Top 40 Influencer by UpDoc Media, a digital media and marketing company specializing in physical therapy and healthcare services.

Other major honors for Bell include the University of Miami Alumni Fellowship Award, the AAOMPT John McM. Mennell Service Award and the Media Orthopedic Reporting Excellence (MORE) Award from the American Academy of Orthopedic Surgeons (AAOS). She is a two-time recipient of the Newswomen’s Club of New York Front Page award, which recognizes newswomen in the New York metropolitan area for excellence in journalism.