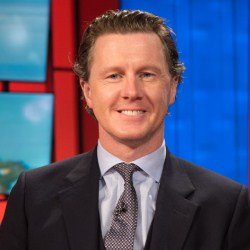 Steve McManaman, one of England’s most decorated footballers, joined ESPN fulltime in August 2010 as the primary match analyst  for Barclays Premier League  and studio analyst for international matches on ESPN networks in the United States.  He also contributes analysis on select events as an ESPN UK pundit.

McManaman came to ESPN after earning critical acclaim for his studio analysis during the company’s award-winning presentation of the 2010 FIFA World Cup in South Africa.  Ranked third in a Top 10 of greatest British footballers to play overseas, McManaman brings a wealth of soccer knowledge and experience to ESPN.

McManaman made history by becoming the first player without first team experience to play for the England Under-21 team.  He signed as a professional with Liverpool FC in 1990 and after making 364 appearances for the club, McMananan transferred to Real Madrid in July 1999.  He became just the second English player to ever play for the Spanish team.  After four years with Real Madrid, he went back to the English Premier League and signed with Manchester City in 2003.

According to Forbes Magazine in 2001, McManaman was listed as high as 6th on the list of highest earning footballers in the world and is believed to have pocketed an estimated 15 million Euros in his four years with Madrid.

He played for England in the 1998 FIFA World Cup and in the UEFA European Football Championships in 1996 and 2000.  In 1996, he put together a series of impressive match-winning performances for England, earning praise from fans and Pelé, who referred to McManaman as the tournament’s best player and tapped him among the best players in the world at the time.

Following his retirement from professional soccer in 2005, McManaman embarked on a new career in television as a commentator, providing analysis for ITV during the 2005 Champions League Final, for ESPN Star Sports in Singapore in 2006, and for Setanta Sports.