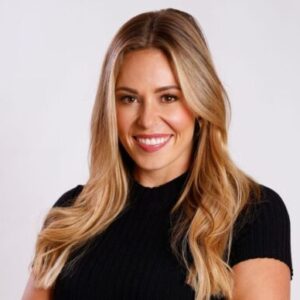 Taylor McGregor is a college football sideline reporter for ESPN, joining the network in September 2019. McGregor currently teams up every Saturday with Anish Shroff and Brock Osweiler to call games around the country, primarily on ESPN and ABC. McGregor also serves as a host for Marquee Sports Network in Chicago, where she is also the lead reporter on Cubs games through the MLB season.

McGregor has had previous stints at AT&T SportsNet in Denver, Colo., THV-11 in Little Rock, KCWY-TV in Wyoming, as well as internships with SEC Network, RazorVision at the University of Arkansas, MLB Network, FOX Sports Kansas City, ROOT Sports, and KNWA-TV.

A proud University of Arkansas alumna, McGregor graduated in 2015 with a bachelor’s degree in broadcast journalism. A Colorado native, McGregor grew up around sports with her late father’s career as an NFL tight end, collegiate athletics administrator, and former president of the Colorado Rockies.