Joe Tessitore is a play-by-play commentator for ESPN. For the better part of the last two decades, he has been among the premier broadcasters for ESPN and ABC’s coverage of college football, as well as the voice of Monday Night Football and veteran blow-by-blow ringside commentator for Top Rank Boxing on ESPN.

His career has spanned many unique roles from hosting the Belmont Stakes on ABC to executive producing an ESPN 30 for 30 film.

Recognized as one of the top game-callers in sports, Tessitore has been widely praised for his versatility, his distinctive voice, and for the joyous enthusiasm in his calls. In 2020, he returned to his true passion, college football, working alongside analyst Greg McElroy on top weekly games for ESPN and ABC.

For two years (2018-19), Tessitore was the play-by-play voice for Monday Night Football, joining such legendary figures as Frank Gifford and Keith Jackson. During his time in the booth, Tessitore called the historic 50th season of MNF and he holds the distinction of calling the highest-scoring game in the series’ history – an unforgettable 54-51 Los Angeles Rams’ win over the Chiefs in 2018.

Tessitore has been a constant presence on the company’s college football coverage.  Best known for calling ESPN Saturday Night primetime and select ABC regular-season games, he previously worked with Todd Blackledge. During the postseason, Tessitore called the College Football Playoff semifinals in 2016 (Peach Bowl: Washington vs. Alabama) and 2017 (Sugar Bowl: Alabama vs. Clemson). Prior to the CFP, he called BCS and the New Year’s Six bowl games, while hosting numerous live shows surrounding the BCS National Championships and College Football Playoff. He also worked the field level play-by-play as part of the company’s Sports Emmy award-winning MegaCast presentation for the 2015-17 College Football Playoff Championship games.

Tessitore has also long been ESPN’s Heisman Trophy expert, serving as the face of Heismanology segments throughout the fall on multiple platforms and contributing to ESPN’s presentation of the prestigious award in Times Square. He was also the primary studio host for ESPN’s daily College Football Live for two years.

A boxing enthusiast and expert, Tessitore leads the broadcast team for Top Rank Boxing on ESPN – now calling more fights than ever on ESPN and ESPN+. As a lifelong and passionate fan of the “sweet science,” Tessitore has relished the opportunity to call the biggest World Championship bouts. In 2020, he called the Tyson Fury-Deontay Wilder II World Heavyweight Championship in Las Vegas. Tessitore has called multiple World Title fights involving current pound-for-pound elites Bud Crawford and Vassily Lomachenko, He was also ringside in Australia in July 2017 for the first fight in the Top Rank series – Jeff Horn’s headline-making upset of Manny Pacquiao for the WBO welterweight title.

Rooted in boxing for many years, Tessitore’s very first assignment for ESPN was a battle of middleweight contenders in February 2002. Since then he has called thousands of fights, including Friday Night Fights, ESPN Boxing specials and The Contender series. He also voiced the majority of the ESPN Classic fight library, called numerous HBO distributed pay-per-views and has been the voice of the popular EA Sports Fight Night video game series.

Tessitore has also been a longtime courtside fixture on ESPN college basketball. On the hardwood, he called weekly conference games for ESPN from 2012-18. Over the last two seasons he led the Super Tuesday SEC primetime package while also calling the SEC Tournament. His ties to the SEC run deep as he was the first host of SEC Network’s Saturday football traveling pre-game show, SEC Nation. In 2011, Tessitore executive produced the ESPN Film Roll Tide, War Eagle focusing on the intense Alabama-Auburn rivalry, and in 2012 he was a producer for ESPN’s 30 for 30 film You Don’t Know Bo about Bo Jackson.

Beyond football, basketball and boxing, Tessitore has covered a variety of other sports for ESPN. Prior to 2011, he spent many years anchoring ABC/ESPN horse racing presentations including the Belmont Stakes and The Breeders’ Cup World Championships. He hosted ESPN’s live New Year’s Eve specials for five years, including Red Bull New Year, No Limits and the debut of ESPN’s ‘Year of the Quarterback’ content series. He has also been a featured contributor for ESPN.com.

During the summer of 2017, Tessitore and Mike Greenberg co-hosted the reboot of ABC’s popular Battle of the Network Stars primetime series from the 1970s and 80s.  That role had Tessitore following in the footsteps of one of his broadcasting idols Howard Cosell, who also called Monday Night Football and boxing during his Hall of Fame career. This opportunity also led to Tessitore’s host role, alongside Rob Riggle, in ABC’s extreme mini-golf competition series Holey Moley. Executive produced by NBA star Steph Curry, the show has been a primetime television hit during its first two seasons (2019-20).

Tessitore has achieved numerous honors and awards. In 2010, he received an Eclipse Award from the National Thoroughbred Racing Association (NTRA) for the 2009 Belmont Stakes telecast on ABC and the 2010 Breeders’ Cup. That same year, the Boxing Writers of America presented Tessitore with the prestigious Sam Taub Award for Broadcast Excellence. He was also a 2010 inductee in the Connecticut Boxing Hall of Fame.

Prior to joining ESPN in 2002, Tessitore was the sports anchor at CBS affiliate WFSB-TV in Hartford for eight years (1995-2002). A native of Schenectady, N.Y., he first gained valuable experience at KXAS-NBC in Dallas-Fort Worth and also worked at WRGB-CBS in Albany, N.Y.

Tessitore is a 1993 graduate of the Carroll School of Management at Boston College. His son, John, is currently a top placekicker for the Eagles.

Tessitore serves on the Board of Regents at Boston College, as well as the Advisory Committee on Entrepreneurship and Innovation. He has long been a supporter of the National Italian-American Foundation, as well as having tirelessly given his time to the Board of Directors for the Connecticut Cystic Fibrosis Foundation. 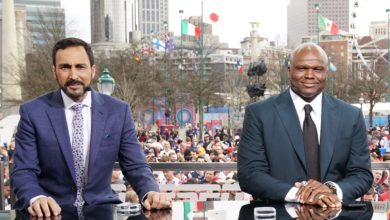