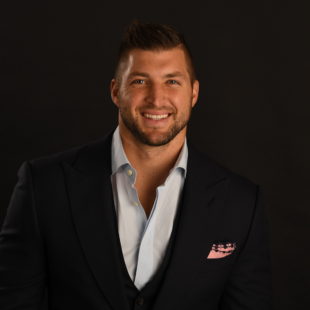 Heisman Trophy-winning quarterback and SEC football legend Tim Tebow joined ESPN in December 2013 as a college football analyst for SEC Nation, the Saturday morning pregame show on the SEC Network which launched August 14, 2014. He first appeared in his new role during ESPN’s 2014 BCS National Championship telecast. Tebow is a regular on SportsCenter, First Take and additional ESPN and SEC Network programming. He is currently signed to play professional baseball with the New York Mets organization.

Tebow led Florida to the BCS Championship where he was named MVP as the Gators defeated Oklahoma 24-14 in January 2009, capping a 13-1 season. Overall, he had a 48-7 record in three seasons at Florida and played in two SEC Championship Games. He was also on the 2006 season’s National Championship team.

At the end of his college career, Tebow held 5 NCAA, 14 Southeastern Conference, and 28 University of Florida statistical records. He was the SEC’s all-time leader in career passing efficiency (170.8), completion percentage (67.1%), passing touchdown to interception ratio (5.5 to 1), rushing yards by a quarterback (2947), and rushing touchdowns (any position).

In 2010, he was chosen in the first round of the NFL Draft by the Denver Broncos and set an NFL Draft record for jersey sales, based on his collegiate and personal popularity. He started the last three games of his rookie season and became the team’s full-time starting quarterback beginning in the sixth game of 2011. The Broncos were 1–4 before he became the starter, but began winning with him on the field, often coming from behind late in the fourth quarter, until they won their first AFC West title and first playoff game since 2005, defeating the Pittsburgh Steelers in overtime. Tebow was traded to the New York Jets during the offseason after the Broncos acquired free agent quarterback Peyton Manning. After the 2012 season, he was released. He spent the 2013 preseason with the New England Patriots.

In addition to his on-field exploits, Tebow is a cultural icon with immense popularity, based on his personality and open devotion to faith. He is equally lauded for the work he does off the field. While still attending Florida, he worked on the “First and 15” program benefiting Uncle Dick’s Orphanage and later went on to create the Tim Tebow Foundation in 2010. The Foundation encompasses multiple philanthropic ventures that support children with life threatening illness, orphan outreach and general encouragement of citizens to volunteer.

Born in the Philippines, Tebow was raised in Jacksonville, Fla., and graduated from the University of Florida in 2009 with a degree in family youth and community science. He currently resides in Florida. Seventh Season of SEC Nation to Debut on Saturday, Sept. 19 with 2020 Season Preview