In March 2022, ESPN signed Hall of Fame quarterback, Troy Aikman, along with Joe Buck, to a multi-year deal, making him the new NFL game analyst of Monday Night Football. Aikman and Buck have been the NFL’s most consistent broadcasting tandem, beginning their partnership in 2002 as a three-man booth with analyst Cris Collinsworth, before becoming a duo in 2005. Over their 20 seasons together, they have called more than 275 regular-season games, more than 40 playoff matchups, 18 NFC Championships and Super Bowls XXXIX, XLII, XLV, XLVIII, LI and LIV. Both have been nominated for Sports Emmy Awards multiple times, with Buck winning a record-tying eight times for play-by-play. During the season, Aikman and Buck work alongside Lisa Salters, Monday Night Football’s longest-tenured sideline reporter.

Prior to joining the Cowboys, Aikman passed for 5,298 yards and 41 touchdowns in two years at UCLA. During that span, the All-American led the Bruins to a 20-4 record. In 1999, he was inducted into the UCLA Sports Hall of Fame. He transferred to UCLA after two seasons at the University of Oklahoma (1984-85). Selected by the Cowboys with the first overall selection in the 1989 NFL Draft, he became the first rookie quarterback to start a season opener for Dallas since Roger Staubach in 1969. In 2009, Aikman was voted into the College Football Hall of Fame.

Aikman retired from the NFL after the 2000-01 season and went immediately into the booth, working the 2001-02 season for FOX Sports, where he remained for the past two decades, prior to joining ESPN.

Aikman was raised in Cerritos, Calif. His family moved to Henryetta, Okla., when he was 12. Aikman went on to earn All-State honors at Henryetta High School. Founded in 1992, The Troy Aikman Foundation for Children has touched many young lives through services such as creating colorful recreation areas in children’s hospitals.

Aikman resides in Dallas and has two daughters, Jordan and Ally. 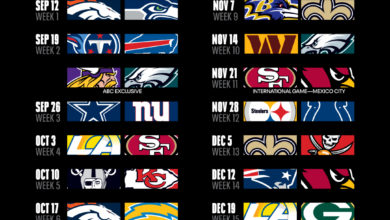 A Record-Setting 23-Game Slate, Monday Night Football with Joe Buck, Troy Aikman and Lisa Salters, and the First ESPN+ Exclusive Game Among the Highlights of the 2022 NFL Schedule for ESPN and The Walt Disney Company