As part of the network’s Upfront presentation today in Manhattan, ESPN announced a strategic collaboration with Twitter that will offer fans and advertisers unique, interactive programs around major sporting events, beginning with the upcoming NBA Finals. The effort will be promoted across Twitter, ESPN networks, ABC and ESPN’s broad array of digital assets, including ESPN.com and ESPN Mobile.

“Working together, ESPN and Twitter are giving marketers a clear and powerful way to link on-air and online social conversations around sports,” said Joel Lunenfeld, Twitter’s Vice President of Global Brand Strategy.  “It’s the first time advertisers can engage the audience around ESPN’s premier content across screens and where the conversation is happening on Twitter.”

Added Ed Erhardt, president, ESPN Global Customer Marketing and Sales, “Advertisers and marketers have been asking for meaningful opportunities that tap into the power of social media.  We know fans use ESPN and Twitter as their main source for content and connectivity.  By taking that scale and combining it with the passion of sports fans, this program answers the value equation of social media while providing a new way for fans to engage with ESPN.  It also gives our clients a tremendous opportunity to own the conversation with us around major sport holidays.” 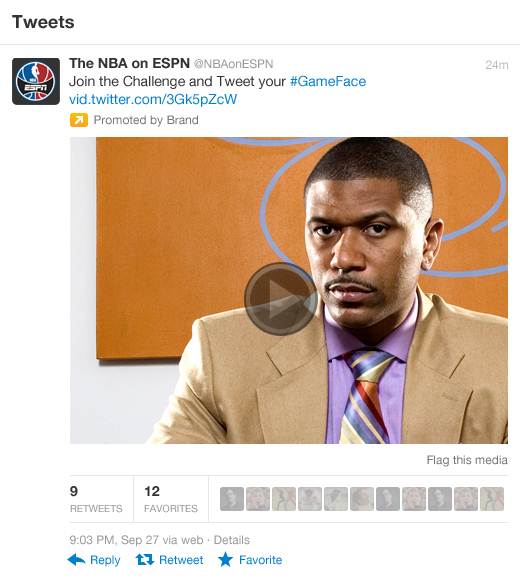 Each program will be co-created by ESPN and Twitter, beginning with GameFace – the first effort, which will be focused on the NBA Finals.  GameFace will be seamlessly integrated throughout the live ABC broadcasts and ESPN’s NBA Tonight programming with a dedicated Twitter hashtag #GameFace.

Fans will be encouraged to tweet photographs of their “game face” throughout the finals.  At the conclusion of each game, NBA Tonight analysts will highlight the competition and reveal the best photographs on-air.  The best photos will also be featured in a photo gallery on ESPN.com/NBA.

On Twitter, #GameFace will be supported through Twitter’s Promoted Products suite (including a Promoted Trend during the Finals), and the experience will be plugged on the @NBAonESPN Twitter handle.  At the conclusion of the NBA Finals, ESPN basketball analyst Jalen Rose will tweet his top five favorite #GameFace entries before revealing the final winner, who will receive a grand tour of ESPN headquarters in Bristol, Conn.

Additional marquee sports events that have been identified include the Global X Games, Road to the BCS National Championship, Super Bowl, World Series, NCAA Men’s Basketball Tournament and NASCAR Chase for the Cup.  Future events will offer a similar interactive experience, with new themes and dedicated hashtags to drive the sports conversation on Twitter.