20-Year Agreement and Rights Extension through 2034; AT&T U-verse Will Distribute the Network at Launch

The Southeastern Conference and ESPN have signed a 20-year agreement through 2034 to create and operate a multiplatform network, which will launch in August 2014, it was announced today by SEC Commissioner Mike Slive and ESPN President John S 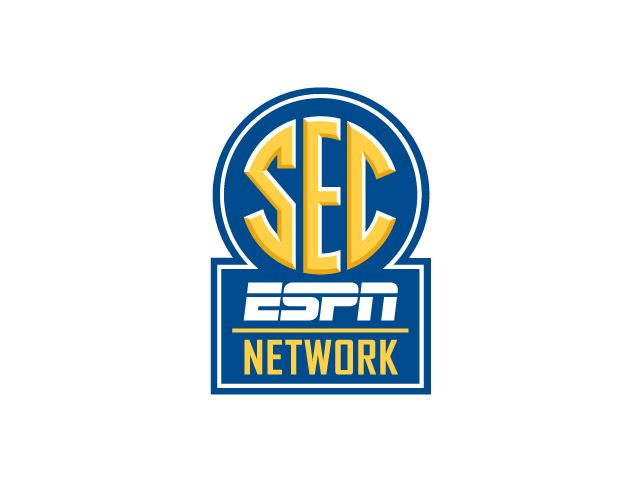 kipper. The new network and its accompanying digital platform will air SEC content 24/7 including more than 1,000 events in its first year.

The network will televise approximately 45 SEC football games, more than 100 men’s basketball games, 60 women’s basketball games, 75 baseball games, and events from across the SEC’s 21 sports annually. Programming will also include studio shows, original content such as SEC Storied, spring football games, signing day and pro days coverage. Hundreds of additional live events from various sports will be offered exclusively on the digital platform. The network and its digital extensions will connect with each SEC institution and create opportunities for each school to produce and develop content.

“The SEC Network will provide an unparalleled fan experience of top quality SEC content presented across the television network and its accompanying digital platforms,” stated Slive. “We will increase exposure of SEC athletics programs at all 14 member institutions, as we showcase the incredible student-athletes in our league. The agreement for a network streamlines and completes an overall media rights package that will continue the SEC’s leadership for the foreseeable future.”

Skipper said, “The SEC is unmatched in its success on the field and its popularity with fans nationwide. The new network’s top-quality SEC matchups across a range of sports will serve all sports enthusiasts including the most passionate, die-hard SEC fans. Also, it will serve the needs of our multichannel distributors and advertisers by providing extremely attractive programming options across all platforms.”

As part of the agreement, ESPN will now oversee the SEC’s official Corporate Sponsor Program. In addition, ESPN and the SEC also agreed to extend their existing media rights agreement through 2034. ESPN has televised the SEC since 1982.  ESPN’s existing networks present more than 1,600 hours of SEC action each year. The new network will focus exclusively on the SEC and add another outlet to deliver sports fans more SEC content than ever.

AT&T U-verse® has been secured as the network’s first national distributor. AT&T U-verse is the fastest growing TV provider in the U.S. and their subscribers will have access to an unprecedented amount of SEC content across all platforms.  Subscribers receiving the live linear network via a multichannel subscription will also have access to the network on PCs, tablets, smartphones and select gaming devices like Xbox. Additional games and coverage will be available through an authenticated digital offering. Fans looking to learn more about how to get the SEC Network can visit GetSECNetwork.com for more information.

“We are pleased to be involved with the SEC and ESPN at the very beginning of this great alliance,” said Jeff Weber, President of Content and Advertising Sales, AT&T. “As the fastest growing and most advanced pay TV service, we want to bring our customers the highest value and most compelling product that we possibly can. Access to the SEC Network, across multiple platforms, will only increase the demand for U-verse.”

ESPN’s Justin Connolly, formerly senior vice president, ESPN affiliate sales and marketing, will oversee the network’s day-to-day operations. The network will originate from ESPN’s Charlotte, N.C., offices with additional staff located at the company’s Bristol, Conn., headquarters. Staff announcements and additional details will be made in the coming months.

About the Southeastern Conference (SEC)
The Southeastern Conference was formed in 1932 and consists of 14 member institutions: Alabama, Arkansas, Auburn, Florida, Georgia, Kentucky, LSU, Ole Miss, Mississippi State, Missouri, South Carolina, Tennessee, Texas A&M, and Vanderbilt. The league currently sanctions championship play in nine men’s sports and 12 women’s sports. Its headquarters has been located in Birmingham, Ala., since 1948. For more on the conference, visit www.SECDigitalNetwork.com